From the RuneScape Wiki, the wiki for all things RuneScape
(Redirected from Jubbly)
Jump to: navigation, search
The Old School RuneScape Wiki also has an article on: osrsw:Jubbly bird

A jubbly is a bird found during the Skrach Uglogwee subquest of the Recipe for Disaster quest. They can be hunted and killed by using ogre bellows on an already bloated toad with a rock from the Feldip swamp rocks nearby and a ball of wool in your inventory (the wool is not used up but the rock is). Combining the wool and the toad creates a balloon toad which is used as bait. They appear to be a big, purplish version of a normal Chompy. Jubblies are also used in Creature Creation. They can also be hunted as part of the Chompy Bird Hunting activity; each jubbly killed will count as one chompy in the player's kill count. Having two pairs of bellows, enabled by the drop trick will enable you to create three balloon toads without haveing to refill your bellows.

Jubblies are not particularly hard to hunt . They do not actually attack you and only run a few squares away when they get too close to you. A good spot to hunt them is just to the east of the Gnome Air Glider, south east of the Castle Wars arena, in the Feldip hills. Once they are killed, they must be plucked to receive the drops. The feathers go into your inventory automatically, while the other drops appear on the ground. 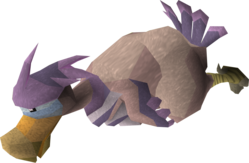