From the RuneScape Wiki, the wiki for all things RuneScape
Jump to: navigation, search
Item JSON: {"edible":"no","disassembly":"no","stackable":"no","stacksinbank":"yes","death":"always","name":"Journal of Perjour","bankable":"yes","gemw":false,"equipable":"no","members":"yes","id":"23646","release_date":"14 February 2012","release_update_post":"TzHaar Quest, Minigame and Graphical Rework","lendable":"no","destroy":"You can get another from the skeleton in the tunnel network leading to the TzHaar Kiln.","highalch":false,"weight":0.51,"lowalch":false,"tradeable":"no","examine":"A very old journal. It seems to be protected from the heat by an old magic. Tucked in its centre pages is a note.","noteable":"no"}

The Journal of Perjour is an item found during the quest The Elder Kiln. It appears to be written by Perjour, a former servant of Zaros who has since sided with Zamorak. It is found on the ancient, seemingly human, skeleton by the end of the first cave to the Elder Kiln.

At the centre of the book is a note on which the numbers of the TzHaar language are translated. This is identical to the note in the Tzhaar tourist guide. This note is useful in solving a puzzle later in the quest.

This book can be found in the bookcase of a player-owned house after the completion of the quest. 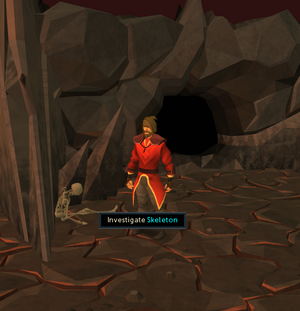 The skeleton that holds the journal.

The writer's first entry expresses his excitement at the possibility of discovering the Elder Kiln, particularly at its power and the opportunity it may bring to Zamorak in creating armies from rock.

The next few entries chart the writer's progress through the tunnels - having to kill rock creatures to continue through and having difficulty solving a code keeping a large gate locked. After eventually opening the gate, the writer was attacked and badly injured and so had to retreat to relative safety.

The last few entries express regret about an unnecessary betrayal of someone who was kind to him, probably referring to the betrayal of Char by Zamorak and his minions.

Rintra 12th: What a joy it is to write in a journal because I want to, not because I have been commanded to. Exciting news: the golem-like TzHaar speak of an ancient kiln that heats their city. Assuming this isn't just folklore, this could be the forgotten Elder Kiln. I have not been as excited about a discovery for a very long time. while my interest is largely academic, this potential power excites me. Zamorak could forge an army out of bare rock if this is truly the Elder Kiln.

Moevyng 8th: It's unfortunate that I must get blood on my hands again, although 'shards of rock' might be more appropriate. On principle I'm a scholar and not a violent man, but if a fool stands in my way, I will cut that fool down. I am long past the point where I feel remorse for what I've done.

Moevyng 9th: The caves are death traps, littered with ferocious creatures composed of fire and rock. It's no wonder the TzHaar avoid this place.

Moevyng 10th: My progress is blocked by a large ornate gate. There are primitive coded symbols engraved onto large scales either side of it. If this is all the TzHaar can do to hinder my progress, Zamorak shall have his army by dawn.

Moevyng 11th: No joy. The code is a little more sophisticated than I first anticipated. However, it shall not be long until I've cracked it.

Moevyng 14th: No matter what I do the door won't budge. I'm sure the answer is in these symbols, but for the life of me I can't work it out, I shall make a tracing and decypher it on the surface. This is inconvenient... 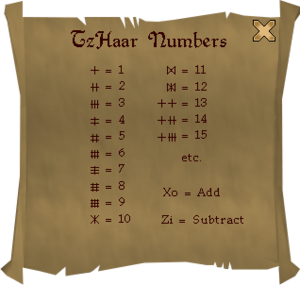 Raktuber 31st: Well, I'll be damned! The symbols are simply numbers. What a fool I've been! Who would have thought that the TzHaar had their own counting system?

Fentuary 3rd: The brute guarding the entrance attacked with surprising speed. My legs are broken in several places and I fear that my body is ruined. Somehow, I have managed to drag myself back across chasms to relative safety. relative, as long as these rock creatures cannot smell my blood.

Fentuary 4th: I regret few things, but our betrayal is one of them. It was unneccessary and she was kind to me.

Fentuary 5th: I grow weak and am now unable to move. I shall die here in these caves alone, much like Char. The irony has not been lost on me.

The update history project is a work-in-progress – not all updates to this topic may be covered below. See here for how to help out!
Retrieved from ‘https://runescape.wiki/w/Journal_of_Perjour?oldid=35387971’
Categories:
Hidden categories: