From the RuneScape Wiki, the wiki for all things RuneScape
Jump to navigation Jump to search
Jerrod? (edit)? (edit)

Jerrod is a werewolf from Canifis. He is a central antagonist in the RuneScape trilogy Betrayal at Falador, Return to Canifis and Legacy of Blood.

Jerrod eventually allied himself with Lord Sulla, a Kinshra lord attempting to overthrow the white knights and the Asgarnian government. After failing to capture Gar'rth during the War of 164, Jerrod fled to the Wilderness with the crippled Sulla, later accompanying him to Varrock directly before and during the war between the Black Prince and Misthalin. After the war, he and Sulla attempted to flee to Kandarin, but were betrayed by the Phoenix Gang. Jerrod was sold to Lord Handelmort in Kandarin, and was kept captive under his control until the events of Dishonour among Thieves.

Jerrod was raised in Canifis alongside his sister. She was sent to Darkmeyer as a tithe. She later returned and gave birth to a child, Gar'rth. This, coupled with Gar'rth's desire to be something other than his nature, led to his isolation. When his mother died, Jerrod took over responsibility for raising his nephew, teaching him how to hunt and showing him the tracks in the swamp. Gar'rth later used this teaching to escape to Misthalin then Asgarnia. The Black Prince, a powerful vampyre and Gar'rth's father, ordered Jerrod to track down the runaway and return him to Morytania.

Jerrod made his way to Asgarnia. Along the way, he preyed on innocents, such as a farm girl and a Gypsy Caravan, for food. This caused a panic amongst the people, and a group of H.A.M. cultists took advantage of it, robbing a dwarf named Doric. Jerrod attacked the cultists, stealing the gems for himself. He caught his nephew's scent on a White Knight squire, tracking him down to the nearby city of Falador. He attempted to infiltrate the castle but could not get past the enchantments, being a creature of Zamorak. He took shelter in the home of a beggar, paying her with the gems. She tried to kill him for his wealth and he force fed her the opals, choking her to death.

He lured Squire Theodore to the home by passing along a message as a concerned citizen. Once Theodore arrived, Jerrod attempted to learn of his nephew's whereabouts. Before he could dispose of the squire, the dwarf Doric and warrior Kara-Meir intervened. Kara-Meir wounded him using her adamant sword, forcing him to flee.

After recovering, he tracked Gar'rth and Kara-Meir to the Edgeville Monastery, where he met and formed an alliance with Lord Sulla. He successfully captured Gar'rth, and attempted to turn him to Zamorak by having him eat Kara-Meir but failed when Sir Theodore, Castimere and Ebenezer successfully broke out of imprisonment and attacked the Kinshra. Castimere and Ebenezer managed to bind Jerrod and plant a bomb at his feet but Sulla knocked him out of the way in time. He proceeded to assist Sulla in the Falador campaign, until Sulla's defeat. He later rescued Sulla from vengeful Kinshra on orders of his master, and led him into the Wilderness.

Jerrod transforms into his werewolf form.

Jerrod acted as Sulla's protector, tracker and carer. It is also revealed that he is receiving messages from his master, allowing him and Sulla to survive in the Wilderness and avoid Kara-Meir, who along with Gar'rth and Arisha were tracking them. After Sulla recruited some criminals and retrieved certain encoded Kinshra documents, they travelled to Varrock, intending to blackmail nobles into providing material support to them. Upon arriving, Jerrod noticed that they are being watched by a young girl, who Sulla realised is a spy working for Straven. As a reward for Jerrod, and a warning to Straven, Sulla allowed Jerrod to tortuously devour the girl, leaving only her heart as a message to Straven. They also captured a thief who had tried to scam Straven by pretending to be Kara-Meir. She attempted to escape, but Jerrod caught her, but was disorientated and wounded by a wolfsbane dagger. She was recaptured by the men and Jerrod, Sulla and Barbec left to go blackmail some nobles.

Whilst in Varrock, Jerrod was contacted by Vanescula Drakan who revealed the location of the Wyrd. Jerrod passed this information onto Sulla and helps him kill the Wyrd, unknowingly betraying his former master in the process, and making him unable to return to Morytania. While the death of the Wyrd granted Sulla political asylum in Varrock, Jerrod was forced to conceal himself in Varrock, allowing Sulla to use him as a bargaining chip with King Roald.

Jerrod remained hidden, with Sulla using him as a bargaining chip with King Roald. When Gar'rth failed to return from Morytania with the rest of the embassy, Jerrod's value increased, causing the Society of Owls to demand his capture. Sulla lead the capturing party into a trap, killing Simon and allowing him and Jerrod to escape in the process.

After escaping King Roald's men, Jerrod and Sulla hid in a house Jerrod had rented until Straven informed them there was a ship to Kandarin for them to flee on. Jerrod and Sulla travelled to Port Sarim, but they were betrayed by Straven, who had received a handsome payment for Jerrod. Sulla was killed and fed to Jerrod.

Jerrod was sold to Lord Handelmort in East Ardougne and was held captive in a cell under Handelmort mansion. He was forced to fight in the Fight Arena, but he grew bored as he kept winning the fights and was running out of challenges. Though he liked the adrenaline rush, he quickly became bored due a lack of challenging opponents. When Handelmort's butler attempted to feed him, Jerrod killed the butler in an attempt to get the key, but failed.

The following takes place during Dishonour among Thieves. 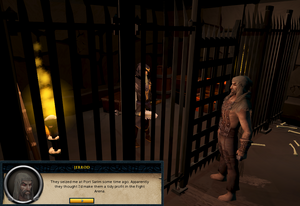 Jerrod is visited and freed by an adventurer.

When Zamorak hatched a plan to steal the Stone of Jas from Sliske, he demanded the aid of Hazeel. Hazeel asked the World Guardian, who was sent to recruit him, to liberate Jerrod. The werewolf joined Zamork's crew, helping the team bypass initial security measures, before finding more wights for Moia to interrogate. He fought his apparition and elite wights which Sliske summoned.