From the RuneScape Wiki, the wiki for all things RuneScape
Jump to navigation Jump to search
For the achievement, see Jed Hunter (achievement).

Jed Hunter is a part of the Tales of the Arc miniquest series.

The time has come to avenge Port Sarim, and Lookout Ekahi is looking for you by Sarim's Revenge on the northern dock on Waiko.

Speak with Ekahi, who will agree to help you hunt down Jed, but has one request: for you to spare Jed's life. The rest of your crew will also request your assistance in preparing for the oncoming assault on Jed.

You may choose, in any order, which crew member you want to help first. 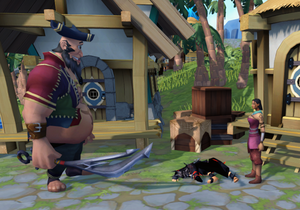 Ekahi "kills" you so Yuehanxan will send him coordinates

Ekahi was tasked by Jed to kill the player and requests the player fake their death, making it easier to pursue Jed. Ekahi believes Yuehanxun the Dealer is working for Jed, and suggests that if Yuehanxun sees you die, she will contact Jed, who will then send Ekahi rendezvous coordinates so Jed can give Ekahi his next task.

Go and speak with Yuehanxun on the south-eastern shore of Waiko; "Captain" Ekahi will stage your death for Yuehanxun. She will be pleased and arrange for the coordinates from Jed to be delivered to Ekahi.

Speak with Bosun Higgs (next to the Quartermaster), who expresses regret in at first lying to you; Higgs was refused leave from her commander, and as such is AWOL. Higgs fears if the Kinshra track her down, you might be held responsible for her actions as well. Feeling unfit to continue wearing her current Kinshra uniform, and with the uniform being easy to spot, Higgs is in need of a disguise. She suggests you speak with Sojobo (contracts) in the Waiko market for help procuring her some new weapons and armour.

After three Gu ronin are defeated, speak with Sojobo at the Waiko market to receive the Tetsu set for Bosun Higgs. Bring the new equipment back to Higgs by Sarim's Revenge, and she will promptly change. 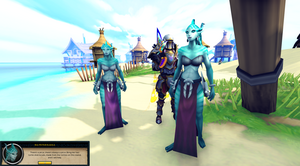 Navigator Jemi has news for you, and upon speaking with her, she will inform the player the Thalassus has been spotted heading east towards the Arc. Jemi wishes to make use of this opportunity and communicate with the Thalassus, requesting its aid in distracting Jed to allow Sarim's Revenge to make a quick escape if weighed down with rescued prisoners. However, Jemi is unable to make the Thalassus answer her calls; she asks you take her to speak with Sea Witch Kaula north of the shipwreck on Whale's Maw, in hopes the Thalassus will answer her.

Kaula will call to the Thalassus, but for a price: two tortle shell bowls. To craft the tortle shell bowls, collect eight shell chippings from the tortles nearby on Whale's Maw using tortle traps, which can be obtained for free from Torts R Us on Waiko.

Return to Kaula and hand her the bowls. She'll begin to sing towards the horizon; the Thalassus will now hear Jemi's words, and she begins to communicate with it. Speak with Jemi back at Sarim's Revenge and she'll inform the player she was able to contact the Thalassus; it's very angry, though not with your crew. The Thalassus has agreed to follow the ship to confront Jed.

Quartermaster Gully wants to prepare Sarim's Revenge for the rescue mission. Gully requests the hold of the ship be cleared out, and suggests extra buoyancy be added to support additional passengers. Gully suggests Rosie at the Chandler's stall on Waiko might be able to make these adjustments.

Speak with Rosie on Waiko to find out she'll make the adjustments for you, she just needs a few materials: ten pieces of driftwood, a taijitu, and five sea shells.

Return to Rosie with the materials in hand and she'll provide the player with buoyancy materials for Quartermaster Gully to install below the ship's waterline. The ship and Gully are now ready to pursue Jed. 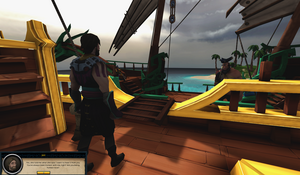 Jed is confronted by the crew of Sarim's Revenge.

Once all crew tasks have been taken care of, talk with Lookout Ekahi by Sarim's Revenge. The rendezvous coordinates from Jed have been delivered. It's now time to head out to sea after Jed.

Talk to Ekahi at the front of the ship. He will spot Jed's sail on the horizon and inform you to get ready. Once ready, confirm with Ekahi you're ready to face Jed.

Jed will sail his ship next to the Sarim's Revenge and begin talking with Ekahi. Ekahi will inform Jed you have been dealt with. Jed will ask Ekahi if he killed you, but Ekahi will deflect the question. Jed invites Ekahi on board to discuss Ekahi's future tasks, and inform the crew Jed plans on selling off the prisoners to The Harbinger. Ekahi objects to Jed, and you run out from hiding to confront Jed yourself; Bosun Higgs reveals herself as well, demanding Jed return her brother to her. Jed tells Higgs that he already sold off her brother to the khan of Goshima. 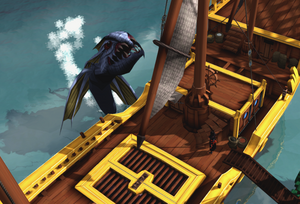 Jed reveals he'd rather end up marooned on an island than return empty-handed to The Harbinger and proceeds to jump off his ship, but the Thalassus is waiting for Jed as he jumps...

Speaking with Ekahi, you apologise for Jed's fate, but Ekahi says the promise to bring Jed to justice wasn't broken by you, but instead by the will of the sea.

Unlock the hold on Jed's ship to free the prisoners and bring them back to Port Sarim.

Jed Hunter (miniquest) is directly required for the following quests/miniquests: