From the RuneScape Wiki, the wiki for all things RuneScape
(Redirected from Java)
Jump to navigation Jump to search
The Old School RuneScape Wiki also has an article on: osrsw:Java Client
For the newest client, see NXT. 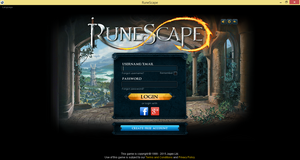 The launcher screen is the same as the normal one on the web. 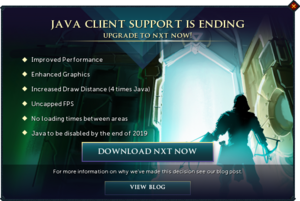 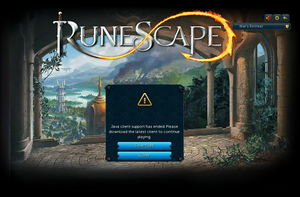 The popup shown when attempting to log into the Java client in March 2020.

The Game Client (or the Java client) is a deprecated open-source RuneScape launcher built by Jagex. At the time of release, the client was an alternative to playing the game in a browser. It was used by 75% of players before the introduction of NXT.[1]

The project began on 20 January 2010 and was launched on 25 May 2010, originally only being available to Windows users. An unofficial GUI client was eventually developed to work with macOS by taking the jar file from the Windows client and wrapping it in the standard macOS Application Bundle. Jagex later placed its imprimatur on the unofficial macOS client by making it available in the download section of the Runescape website. As of 5 August 2015, the latest release is version 1.2.7.

Prior to 25 May 2010, the client was an Internet Explorer-based site-specific browser application that allowed a user to play RuneScape without using a conventional browser. However, players using higher-end computers may prefer to use the browser based version as the client has size and resolution limitations that the browser version does not. Using third-party software to play RuneScape does not violate the Rules of RuneScape, but is not recommended for use by Jagex. Version 1.0.0.5 was the last stable of this release client version by Jagex.

On 7 November 2019, download links for the client were removed. Access to RuneScape through the Java client was removed entirely on 18 December 2019.[2][3]

The download links for the Java client have been removed.

If users are having problems with the Game Client, they are recommended to try following these steps in order and see if they can resolve their problem.

Set up exceptions to your firewall for RuneScape[edit | edit source]

If you're game has crashed or if you've experienced any errors such as a black screen, graphical bugs or you're getting no sound, you'll need to delete the following files and folders if they exist on your Windows computer.

Note: After clearing your cache, you may lag until the cache gets rebuilt to 100%. You can review your cache %by using the displayfps command on the Developer console.

To start the game client on safe mode, press repeatedly or hold the letter 'S' when you launch the game client. After you've reached the login screen, you can play the game using the Safe Mode display mode but it is recommended to switch to DirectX if you're using Windows or OpenGL if you're using Mac or Linux. Both DirectX and OpenGL should give you a higher fps than Safe Mode.

If you get a message saying "error applying transforms" when attempting to install the client, switching your computer's language to English should make the error go away letting you install it.

If you're getting this error, you might need to clear your game cache. If you're trying to play with 3 or more simultaneous instances of the client, click the icon a bunch of times really quickly.

This error means the shortcut you use to launch the game is having a problem.

When the Game Client loads, I get a page saying "Page cannot be displayed"[edit | edit source]

This is most likely to do with a personal firewall which is blocking the Client from accessing the internet. Users will have to allow the program ("runescape.exe" or "JagexLauncher.exe" for Windows users, and "RuneScape.app" for Mac users) access to the internet in order for it to work. If that doesn't work, try changing the world the client connects to or use a VPN.

When clicking on the map, the screen goes black, as if loading, but never loads[edit | edit source]

Click on the screen, and if it doesn't load, open another program to minimize it. If that doesn't work then just exit the program and restart it.

(Mac) When I try resizing the window, the client locks up[edit | edit source]

The Mac version of the client cannot be resized in software mode. Switching to OpenGL solves the problem and will allow access to the resizable and full screen options. The window can be resized in OpenGL, and the graphics can subsequently be switched back to software mode without problems.

Too many login attempts from your address[edit | edit source]

This is a known issue some Players are currently experiencing. If it happened to you, report it to Jagex. You might also be able to login by using a mobile connection or VPN.

If you update your client, you will have to apply the changes made to the configuration again.

On Windows the configuration is stored in the file %USERPROFILE%\jagexcache\jagexlauncher\runescape\runescape.prm

To edit this file type %USERPROFILE%\jagexcache\jagexlauncher\runescape into Explorer's address bar and open runescape.prm in Notepad. If you can't save, make sure the game is closed and try again.

On macOS, the configuration is stored in the file Runescape.app/Contents/Info.plist

To edit this file open Terminal and type the following:

You can increase the amount of maximum heap the RuneScape client uses and it is often a recommended step in troubleshooting on the official Forum. To do this:

Allocating too much memory to the heap can cause game instability. If, after increasing the amount of maximum heap, your client begins to crash to desktop, decrease the maximum heap size and try again. -Xmx512m is generally considered a safe heap size, and should not be increased unless absolutely necessary.

You can optionally choose a different garbage collector for the RuneScape client to use. This will potentially improve map loading times, and decrease lag caused by garbage collection.

To make the changes to your Client's configuration file:

Enabling SSL connectivity will help you if you're connecting via a mobile network, restrictive network, proxy, or firewall.

To do this add one of the following flags to the configuration file:

Use on Linux[edit | edit source]

Create an executable sh file and add the following to it (you must have 7zip installed before running):

Alternative use on Linux[edit | edit source]

It is possible to use the windows client on linux systems as follows:

Everything from "/usr" to "/images" is a single command line in the script file. You can also increase the memory allocation (-XmxNNNm where NNN is a number) if you want. See "man java".

12. Make runrs.sh file executable (chmod a+x ~/runrs.sh)
13. From a terminal. ~/runrs.sh
14. You may also need to create the following directories:

You could also get the client to be installed by downloading the program Wine and using it to install the client. (confirmed for Debian Squid, and it also works out-of-the-box on Linux Mint 12 with Cinnamon, though not with XFCE4 (and maybe some other DE's). More confirmation needed)

There are two main versions of Java available, OpenJDK and Oracle. For each, version 6 or version 7 can be used. There may be issues associated with some versions, for example oracle versions 1.7 may work only in software mode, while 1.6 will work in OpenGL (which is preferred.). OpenJDK-7 should also work in OpenGL.

To install OpenJDK version 7 on Ubuntu 12.10, type in a terminal:

It is possible to install a version of Java specially for the game client, so that it doesn't need to change the Java used by other applications on the operating system. This can be done for example by downloading and installing the Oracle Java packages without using the OS package manager. It can then be installed in its own directory, for example /usr/lib/jvm/jre1.7.0_13/, and then for the simple script above, the final "run the client" line the following would be used instead of just "java":