Jambon is a piglet found wandering around the RuneScape mainland, including Asgarnia, Misthalin, Kandarin, and Feldip Hills. Like Bob the Cat, it has an extremely large wander radius. It may be prodded, but players doing so will be given an electric shock similar to the overload animation, causing players to exclaim "Ow! How did that pig give me an electric shock?" 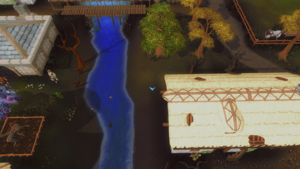