The Jagex Store is an online store owned by Jagex. The store sells official RuneScape-related merchandise.

The store home page displays several featured and sale items. The store region can be changed using a menu accessed by clicking on the flag at the top right of the page, above the shopping basket.

The store is separated into seven tabs (All Items, Apparel, Accessories, Computer & Phone Accessories, Home & Gift, Angels Scapes, and Soundtracks). Each tab shows the name, thumbnail, and price of all the items it contains on one summary page. More information, including item description and product sizes, can be found by clicking on the item image or item name.

It is important to note the prices and items below are not automatically updated, so items may no longer be on sale or the price may have changed.

Not On Sale/Discontinued[edit | edit source] 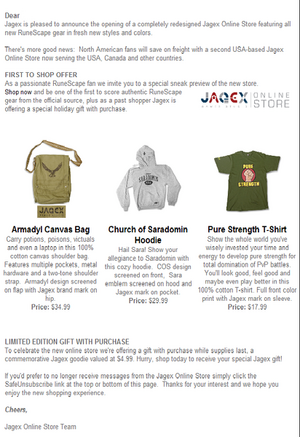 An e-mail sent from Jagex regarding the new site and items.