From the RuneScape Wiki, the wiki for all things RuneScape
Jump to navigation Jump to search
This article is about the child from Meeting History. For other uses, see Jack (disambiguation).
Jack? (edit)? (edit) 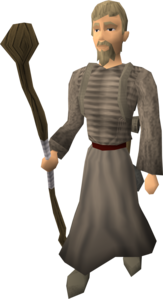 Jack was Gielinor's first wizard and the inventor of fire strike. He is the son of Laura and Roger, and has a sister by the name of Sarah.

In "Past A", Jack is a child playing by a fire pit with a Fire rune and an Air rune.

Jack says he will grow up to be a great druid, and will help the world by making it rain chocolate cakes and strawberry milk.

In "Past B", Jack is an adult and players find out he is not a druid but a wizard, and the founder of the Wizards' Guild.

He will tell you that he was taught magic by Misalionar, one of the first druids to inhabit Gielinor. Misalionar was a servant of Guthix during the First Age.