From the RuneScape Wiki, the wiki for all things RuneScape
Jump to: navigation, search
The Old School RuneScape Wiki also has an article on: osrsw:Item set
Not to be confused with Item pack. 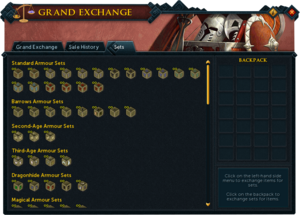 Item sets are used in the Grand Exchange to "compress" several components into a set. This makes it possible to trade an entire set at once on the Exchange, instead of being forced to trade each component individually. The only way to create sets from individual components is by swapping the pieces for the set with a Grand Exchange clerk.

Almost all sets consist of sets of armour. Not all types of armour, however, have sets. Snakeskin armour, for example, does not have a set.

Item sets are a convenient way to store and trade complete sets. The advantage of using item sets, is that sets are only one item, instead of the 3-5 pieces that make up the set. This saves trade slots at the Grand Exchange, of which there is a limited number, and allows the set to be traded as a whole, instead of waiting for each piece to be bought or sold individually. Item sets can also be used as a more efficient storage means, as they only take up one bank space instead of four, and many players find they must conserve space.

For each standard or trimmed metal armour set, there are two types of sets. One type, denoted by an "(lg)" suffix (meaning "legs"), contains a platebody, platelegs, full helmet, and kiteshield. The other type, which has an "(sk)" suffix (meaning "skirt"), contains the same items, except the platelegs are substituted with a plateskirt. All other armour sets without separate leg and skirt pieces only have one variation.

The options available for any set within the Item sets interface.

To create item sets, players must bring the un-noted components for the set they wish to make to a Grand Exchange clerk. Each clerk has a right-click option called "Sets" which must be chosen to bring up the "Item sets" interface. On this interface, the available item sets are listed. To check the components that make up a given set, players select the "Components" option on the set from the right-click menu (or through a single left-click). If a player has each of the components necessary in their inventory, they can select the "Exchange" option, which will swap the components for the set.

Turning a set into its individual components involves a similar process. Instead of right-clicking on the sets in the interface, players do the same on the sets in their inventory and select the "Exchange" option.

There is no other way to turn a set into its components, or vice versa, except through the Item sets interface.

The only item set that is not an armour set is the Dwarf multicannon.