From the RuneScape Wiki, the wiki for all things RuneScape
(Redirected from Iorwerth)
Jump to navigation Jump to search
The Old School RuneScape Wiki also has an article on: osrsw:Iorwerth Clan
This article is about the clan. For the leader of the clan, see Iestin Edern. 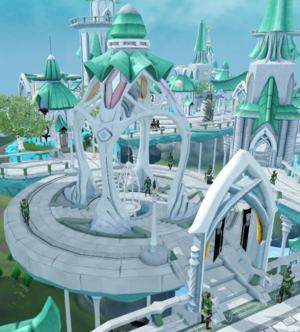 The Iorwerth Clan is one of the eight elven clans that inhabit Tirannwn. Their former leader, Warmaster Lord Iorwerth, is the initiator of the Elven Civil War due to conquering Prifddinas and seizing the Tower of Voices and the Grand Library, denying access to the city to non-Iorwerth elves. The civil war, which has caused the deaths of thousands of elves, is the reason for the Iorwerth Clan being regarded as an enemy to elven society. Although they were initially followers of Seren, the loyalty of the Iorwerths swayed to the Dark Lord (the death aspect of Seren) under the leadership of the former Lord Iorwerth.

They are skilled melee fighters and have a long tradition of slayers. They are located south west of the Tower of Voices in Prifddinas, off the southern path.

At least one other elven family, the Edern, are under auspices of the Iorwerth Clan.

A butterfly found in the Iorwerth Clan district at Prifddinas.

Like the other seven clans, the Iorwerths arrived to Gielinor with the crystal goddess Seren in the First Age. There, each clan aided in the construction of Prifddinas from elven crystal and received its own crystal tower connected to the Tower of Voices in one eighth of the city.

Throughout the Second and Third Ages, Tirannwn remained a safe haven as the territories east of the Galarpos Mountains suffered greatly during the God Wars, mostly due to Seren's guidance and the efforts of the Cadarn Clan, who defended the lands. At the end of the God Wars, Seren was forced to leave Gielinor by Guthix, so she shattered herself instead, due to the "curse" she had placed on them. After the Break Out, the militant Cadarn Clan departed from Tirannwn to escape their isolation and build an empire east of the Galarpos.

With most of the military gone, the Iorwerth Clan, led by Lord Iorwerth, conquered Prifddinas at an unknown point during the Fourth Age. According to Iestin Edern, they did this because with both Seren and the Cadarn Clan gone, they wanted to prove to the other clans what they were capable of as they desired to return to Tarddiad. However, as the years passed, they lost their way and began to fanatically praise the Dark Lord. Many elves died and the remaining clans had to flee into the forest of Isafdar to escape death, with one notable settlement, Lletya, still existing today as a new elven settlement following the war's conclusion.

In 1930, the Cadarn Clan found out about the civil war due to the report from Adwr, a scout who was sent into Tirannwn as a result of the Great Divide. King Baxtorian Cadarn launched a campaign to liberate Tirannwn and oust the Iorwerths from power. His efforts culminated in the Battle of Prifddinas in 1934 or '35, which saw his defeat. The Cadarn Clan retreated to their eastern kingdom only to find it ravaged. Baxtorian "buried himself beneath a waterfall" in grief of his lost wife, and the leaderless Cadarn ventured back to Tirannwn as elven rebels.

The Iorwerths maintained their grip over the elven lands, even though Prifddinas was been reverted to crystal seed form by its Elders. They formed the Prifddinas Death Guard to search for the Temple of Light, where it housed an ancient death altar, which had enough death energy to bring the Dark Lord back to life. During this time, they also made an alliance with King Lathas of East Ardougne, though they intended to discard him once their plans were fulfilled. King Lathas "quarantined" West Ardougne under the pretence of a plague so the Death Guard could kidnap West Ardougne's citizens as slaves to excavate the Temple of Light.

In 169 of the Fifth Age, a human adventurer affiliated with the elven rebels reactivated the safeguards in the Temple of Light, preventing anyone from entering the temple for the next thousand years. Despite this, there was a backdoor into the temple created by Thorgel through the Underground Pass, but because there had been a fierce battle that left many dead in those caves, the Death Guard were fearful of returning there and remained unaware of it. This forced Lord Iorwerth to find another source of death energy to keep their plans on track. He let Essyllt, the actual Head Mourner, decide how to create the required energy. Essyllt planned to herd the population of West Ardougne into a cavern and collapse it to give them a quick, merciful death, though his plan was stopped by the same adventurer who managed to start a revolution. As a result, the Iorwerth were thrown out of West Ardougne and forced to retreat.

It is also shown that Lord Iorwerth had Iestern try to find a way to reconstruct Prifddinas without the other seven elders. If successful, he would make his version of Prifddinas an Iorwerth-only settlement, and all non-Iorwerth elves would be treated as second-class citizens.

With the war over, the Iorwerth surrendered. As there was no current Lord/Lady due to the Dark Lord having killed the previous Lord Iorwerth, Morvran was second in line due to being related to him. Morvran did not accept the position though, as both he and the other clans felt that they needed a more moderate choice, and eventually decided on Iestern. Though many Iorwerth found it an unusual choice, especially the hardliners, Iestern was accepted by the majority; the hardliners were kept in place by Morvran.

As of now, the current Iorwerth are attempting to find peace with their fellow clans after having oppressed them for so long. Progress is being made though, as Baxtorian himself states that they have redeemed themselves a bit. 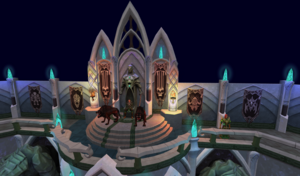 The Iorwerth slayer master Morvran, watching over Rush of Blood with chained hellhounds beside him.

The Iorwerth Clan are most infamous for their conquering of Prifddinas and the murders of thousands of elves in the Elven Civil War and subsequent conflicts. Aside from that, they appear to be a powerful military force, having defeated the Cadarn Clan, who are considered to be superior to them. However, the Iorwerth did have allies to support them, which gave them an upper hand against the Cadarn Clan. They were allied with King Lathas, using his bitterness over sharing his throne with his brother to gain control over West Ardougne. They followed Seren before switching allegiance to an entity known as the Dark Lord, revealed to be a corrupted, death-obsessed shard of Seren. Enemies include King Tyras Ardignas and his army, the other seven elven clans (most notably the Cadarn Clan).

Iorwerths are clad in sturdy but versatile dark, forest green armour with pointed headwear and broad, pointy shoulderpads. Their boots and bodies are partially brown, however. Elfs from Iorwerth Clan favour melee combat, and many are skilled in the art of slaying. Following the start of the elven civil war, the Iorwerth included trackers and scouts to supplement their army.

Though the Iorwerths hold immense pride in the army as they form its bulk, Arianwyn claims that it is the Cadarn who do most of the work with their surgical strikes. 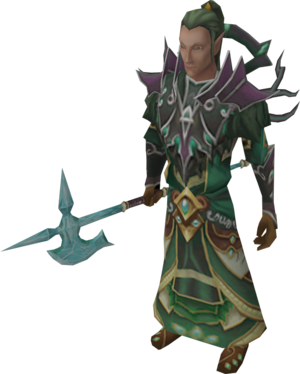 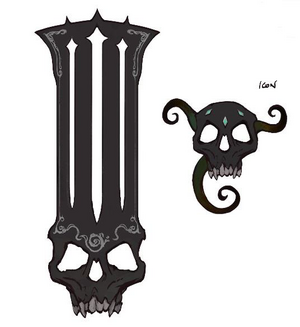