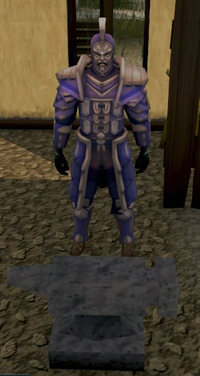 Equipped Invictum armour teased by Mod Liam in a tweet[1]

Invictum armour was a set of level 80 armour that was originally planned to be released as part of the upcoming Mining and Smithing rework. The set would have included, at the very least, a full helmet, a platebody, platelegs, a shield and a scimitar. The armour would have required level 80-89 Smithing to create, depending on the piece smithed, and would have been made from ore requiring level 80 Mining.[2] [3] Invictum armour was replaced by bane equipment as the tier 80 smithable equipment in the second concept of the Mining and Smithing rework.[4]

On 7 January 2019 the armour was released as cosmetic overrides, the Invictum Outfit and Invictum (Masterwork) Outfit, alongside the Mining and Smithing rework to be obtained by spending 100% respect from participating in the Artisans' Workshop.