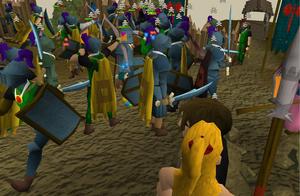 Players fighting for the village during the War.

The International PvP War was a RuneScape community event coordinated by Jagex that took place on both 31 July and 1 August 2010. The War consisted of six separate PvP battles between different language communities in the centre of Gunnarsgrunn. The War was first announced on 29 July 2010.[1] Event information, a FAQ, and tips were posted on the RuneScape Forums by Jagex. Mod Achilles called it "one of the biggest challenges yet taken in RuneScape".[2]

All battles took place on the PvP World 21, in the centre of Gunnarsgrunn. In a PvP world, if a player dies, they will lose most or all of their items. There were six total battles, three on 31 July, and three on 1 August. There were four different teams fighting, with each team representing two language communities. Each team member was required to wear a certain team cape, depending on what team they represented (see below for teams and capes). The cape merchant that sold the correct types of capes is William, who sells the capes for 50 coins each. Alternatively, team capes could have been purchased from the Grand Exchange.[2]

Screenshots were taken during the battle, and the predominance colour on each screenshot would earn points. The winners were the team with most points after the 6 battles.[2] On 2 August, Jagex announced the the results of the War.

All times are in British Summer Time (BST).

The winning team of the war was Team 1 (the English and German communities), who held the centre of Gunnarsgrunn for most of the competition. Teams 2 (Dutch and French) and 4 (Spanish and Polish) came in equal second, while Team 3 (Portuguese and Nordic), which came in last place, was still able to take the centre of the village for a while.[4]

Mod Crow attended the event, taking screenshots with the orb of oculus. The screenshots were posted on Jagex's Facebook account the next day.