The Instant Demo was a game mode that was made to give people a chance to play on a smaller world with fewer quests, all without having to sign up. The feature was introduced on 29 March 2010 and was listed on RuneScape affiliate sites such as Solitaire Online and Miniclip. Once accessed, the instant demo was unlocked on the official RuneScape website. With the update on 21 April 2010 Instant Demo no longer needed to be "unlocked." Players were given access to 9 quests and a restricted world that did not have access to several main features including chat (needs age verification). During the tutorial the player was known as 'Adventurer'. However once in game, this changed to 'Player #' (Where # is changed to a random number). Instant Demo was played on World 901. The Instant Demo was later removed on 9 June 2010 for players who already have an active account on the non-demo version of RuneScape. However, players who had a save mode in instant demo, regardless of already having a normal RuneScape account, could access the instant demo. The demo accounts were no longer available to players who hadn't already created a demo account. On 6 October 2010 the ability to login to the demo was removed with The Void Stares Back update. 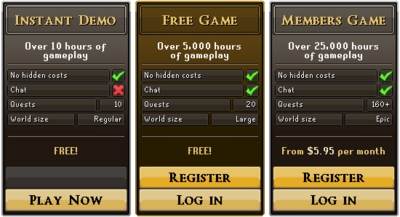 Players play Unstable Foundations as the tutorial quest and have the option to play 8 other quests:

The maximum quest points available is 19. 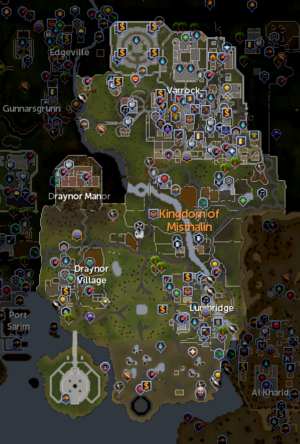 The map of all locations players could reach in the instant demo.

Only a small selection of music was available in the instant demo:

Adverts were used to unlock instant demo mode on RuneScape.