From the RuneScape Wiki, the wiki for all things RuneScape
(Redirected from Instanced Shard World)
Jump to: navigation, search
Not to be confused with instance. 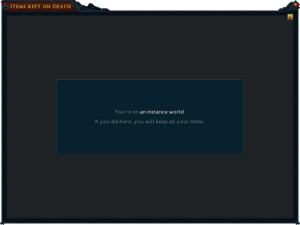 Items kept on death interface on an instance world.

An instance shard world is a world (or server) sharded off from the rest of the servers. A player cannot access an instanced shard world except through specific means such as activating a trigger or teleporting to said location.

RuneScape's first instanced shard world takes place in the form of the updated Tzhaar Fight Pits. When players chose to play "globally", the players were taken to a world which cannot be accessed from the world select screen. This world is referred to as an instance shard world, and one cannot teleport out of it. Upon being disconnected, you are returned to the cave entrance and told "This world no longer exists."

Players can also access an instance shard world through Clan Citadels. When a player accesses the Clan Citadels portal, they are taken to the shard world specifically designed for their clan. Every clan has their own personal shard world, which allows multiple clans to co-exist on the same map without interfering with each other. This allows clan mates, regardless of their actual world number, to interact with each other at their citadels.

Players see this term when trying to teleport out of their Clan Citadels or when playing globally in the Tzhaar Fight Pits; this is impossible, as in order to leave the shard, you must leave through the only entrance: the Citadel portal or cave entrance respectively. Attempting to teleport leaves you with a message stating "You cannot teleport from an instance shard world."