From the RuneScape Wiki, the wiki for all things RuneScape
Jump to: navigation, search
The Old School RuneScape Wiki also has an article on: osrsw:Instance

An instance is a special area, typically a quest area, that generates a new copy of the location for each player or group that enters the area. Players cannot see other players in instanced areas unless it is a group instanced area - in which case the group cannot see any other groups.

Instanced areas can take place in entirely new areas that cannot be accessed without the instance or in areas that are normally not instanced. Most non-quest boss instances will require the player to pay a specific sum of money or have an item in their inventory to access the instance.

Examples of instanced areas include: 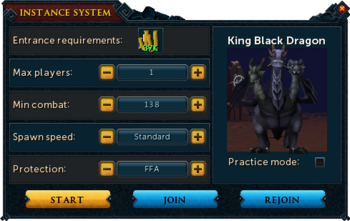 Creating an instance with the King Black Dragon

Most bosses have an instance option (sometimes called "custom session" or "custom encounter"), which may have a setup or entrance cost (coins or an item). Instances also share the requirements of the boss, and "hard mode" instances often have an additional requirement. The cost varies per instance and are shown below.

Most boss instances can be rejoined easily - simply use the "rejoin" option in the instance creation interface to re-enter the instance. If there is no one in the instance, the remaining duration of an instance can be extended by an hour by using the hourglass found in the HUD, costing the same as making a new instance (only available for God Wars Dungeon and The Heart bosses). Exiting to the lobby or logging out in an instance will automatically remove you from the instance, placing you either at the entrance to the instance or the grave location, boss dependant.

Most bosses also have a practice mode available, which is toggleable from the instance creation interface. This mode makes all deaths inside the instance safe (including Hardcore Ironmen) - all items retained and no grave spawned - but the boss gives no experience, drops and the kill does not count toward Slayer or Soul Reaper tasks, nor is it added to the counter found in the Hero interface. Gear degrades as normal and consumed food, potions, ammo, runes and any other items are not refunded when leaving. Augmented items will still gain experience.

When beginning a practice session where possible, players do not have to pay to start the instance. The only exception is Barrows: Rise of the Six, where a barrows totem is still required.

When the instance time runs out, a message says, "This arena has now expired and no further bosses will spawn." If the player is in the middle of a fight, the boss will not respawn after it is killed. If players wish to renew the instance, simply pay coins or kill count through the HUD on screen. Note that not all bosses possess an instance renewal feature.

An onscreen timer will appear when the boss spawns and will stop upon its death, tracking the player's fastest time killing it. The timer, and consequently their fastest time, will not appear if the maximum number of players allowed in an instance exceeds a certain amount:[1] The timer will also lose track of the kill time if it takes too long. Personal bests can be reset in the Beasts tab.

Note that for Telos, the timer does not appear in encounters of 99% or lower enrage.

Instance shard worlds are special worlds (or servers) that have been sharded off from the rest of the servers. They cannot be accessed via the world select screen. Currently, only the TzHaar Fight Pit, Flash Powder Factory, Crucible, Burthorpe Games Room, Big Chinchompa, Cabbage Facepunch Bonanza and all Clan Citadels are located on instance shard worlds.