In Memory of the Myreque (miniquest)

In Memory of the Myreque (miniquest)[1] is a miniquest which preceded the release of River of Blood. During the miniquest, the player builds monuments to honour allies lost in the Myreque quest series.

The finished statues act as altars, which give five extra Prayer points per statue built. Completion of In Memory of the Myreque is a requirement for obtaining the master quest cape and completionist cape.

To start the miniquest, speak to Veliaf Hurtz in the graveyard north of Canifis, next to the sundial. He will explain that he wishes to build statues around the sundial to remember his fallen comrades, and that he will build a plinth for a new statue every day, starting after the day you first speak to him. Although this means that the miniquest is timegated and takes 10 days, you can speak to Veliaf, wait ten days, and then build all the statutes at once.

After Veliaf builds a plinth, you may build a statue on it by using two 5kg blocks of granite, which may be mined in the Desert Quarry by the Bandit Camp lodestone or purchased on the Grand Exchange. Building all ten statues requires twenty blocks of granite in total.

After a statue is built, it must be decorated with a blisterwood sickle and a specific item significant to the Myreque member being honoured. You may speak to Veliaf and ask him about adding items to learn which one is required for that day. With the exception of the blisterwood crossbow and the holy water, all of these items may be gathered within Morytania.

An additional two plinths were added on 4 May 2016 for all players who have completed the miniquest. Currently they cannot be built upon, as Veliaf says they are reserved for Ivan and himself.

After completion of River of Blood, players can speak to Veliaf to inform him that Safalaan is alive. After speaking to him, players will unlock the achievement Myreque in Memoriam, and Veliaf will teleport to the top of Castle Drakan. 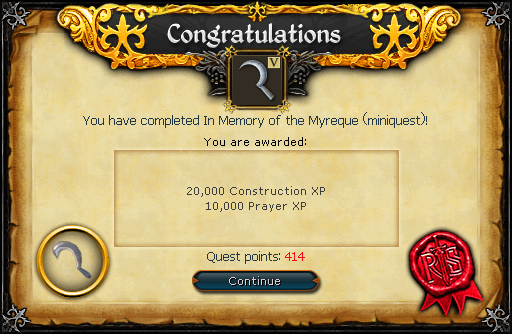 Players who completed statues between 12 April and 8 May 2016 received an Early Bird Bonus. Paying respects at each of the statues granted 1/40 of the total fixed experience rewarded from the Myreque quest series. Players could choose whether to gain combat experience or not when paying respects for the first time. The early bird reward for one statue was:

Paying respects at all ten statues in April 2016 gave the following 106,250 experience in total:

In Memory of the Myreque (miniquest) is not currently required for any quests or miniquests.