Impressing the Locals is the first part of the Tales of the Arc quest and miniquest series and serves as an introduction to the Arc region as the quest is required to enter that region.

Before 12 December 2016, this quest was a miniquest, but it was changed to a novice quest to increase its visibility and that of the Arc. Those who had already completed the miniquest version need not complete it again.

Searching for a crew[edit | edit source]

Speak to Trader Stan, found at the charter boats in Port Sarim (the southernmost pier), in order to start the quest. Use the option to talk about the Skulls pirate Jed and his return for invasion. He tells about how Jed stole two of his ships and used the latter to assault the Port Sarim Jail, and he asks for help recovering them. He then talks about the Wushanko Isles and how he used to trade overseas there until the wild sea creatures started appearing years ago, but figures if Jed can get through with his ships, so can he.

He then makes a deal with you to find a crew willing to go to the isles with one of his other ships; you'll need a quartermaster, a navigator, and a bosun. You must talk to him about each of the three crew members or they won't talk to you about the quest. Trader Stan believes Surula can advise you on a good quartermaster to hire for your crew. The navigator would be a siren; Stan suggests Seasinger Umi to fill the role. And for help in finding a bosun, he suggests speaking with Guard Captain Roarkwin. 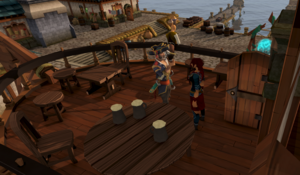 Go north and enter the blue player-owned port portal east of Brian's Battleaxe Bazaar and speak to "The Barmaid", Surula, in the pub to find a quartermaster in Stan's name. She asks if you came to settle his tab, but makes a deal for you to cover for him in exchange for information. A pay-up of 1000 coins and she'll direct you to Mister Gully upstairs. Talk to Mister Gully on the balcony, and he'll accept your offer after you mention the Skulls. 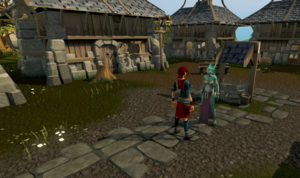 Talk to Seasinger Umi, east of the portal, and ask her to join the crew as navigator with knowledge of the Eastern Lands. She's flattered by Stan's remarks, but declines the offer as she likes it in Port Sarim, not currently wanting to go back to the Eastern Lands. She does suggest that you recruit her sister instead, since Jemi plans on returning home soon anyways; find Seasinger Jemi beside the Rimmington well, and she'll agree to join. 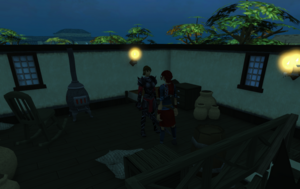 Talk to Guard Captain Roarkwin in the Port Sarim Jail. For a bosun, he suggests a former Black Knight, Jacob, but he was abducted during the first assault by Jed; he'll ask for a favour to inform Jacob's sister of his abduction. Meet with his sister, a Black Knight sergeant, in Draynor Village, in the upstairs of the pottery oven building; she'll try to ward you off, but when she learns of his abduction by the Skulls, she'll agree to join your crew, and introduces herself as Evie Higgs.

Once you've recruited all three crew members, return to Trader Stan and talk about the Skulls pirates again. After the end of the Port Sarim Invasion, he'll request on behalf of the people of Port Sarim that you bring back all the abducted people, and add a personal request to bring back a mystery item that was on the first ship that Jed stole. 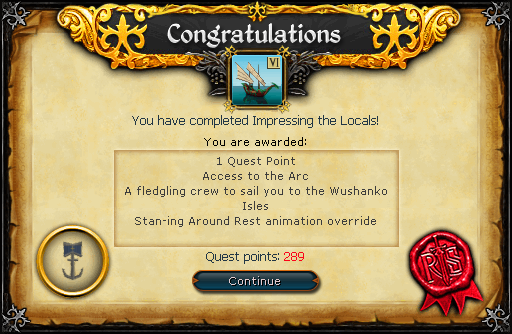 Impressing the Locals is directly required for the following quests/miniquests: 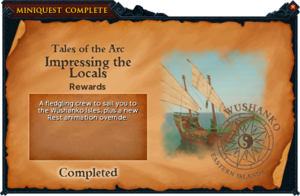 The previous reward screen when it was a miniquest.
Retrieved from ‘https://runescape.wiki/w/Impressing_the_Locals?oldid=35968334’
Categories:
Hidden categories: