Imp Catcher is a voice acted, low-level quest that starts in the Wizards' Tower, but takes the player all over Misthalin in search of Wizard Grayzag's imps, who have stolen Wizard Mizgog's beads.

Make your way to the Wizards' Tower, south of Draynor Village over a stone bridge. Ascend the beam in the centre of the tower once to reach the 1st floor[UK]2nd floor[US]. Talk to Wizard Mizgog, located in the south-east room, and ask him what's wrong to find out he needs your help. He will tell you Wizard Grayzag's imps have stolen his four magical beads and wants you to get them back for him. He will then hand you a message, which provides further details.

Mizgog's message reveals that his four magical beads are held by imps next to the four elemental runecrafting altars, which are found throughout Misthalin. Mizgog will not accept the beads dropped by regular imps, as these are fake beads created by Wizard Grayzag.

The beads can be obtained in any order. 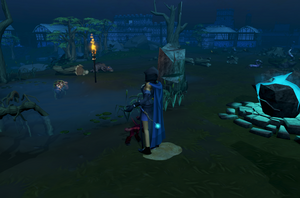 The phlegmatic imp vomiting up the bead.

The white phlegmatic bead is held by the phlegmatic imp, who is found next to the Water altar, located just east of the Wizards' Tower in the north-western section of Lumbridge Swamp. Talk to the imp to discover that he is feeling ill and apathetic after taking a "white pill" given to him by Wizard Grayzag. Suggest that you could make him feel better by giving him a bowl of hot water, and he will ask you to get it for him.

An empty bowl can be found in the Lumbridge Castle kitchen, which can then be filled at the nearby sink and heated on the nearby cooking range to obtain the hot water. As the range in the castle requires Cook's Assistant, players who haven't completed may use another range, such as the one in the house next to the graveyard to the south of the castle.

Give the imp the bowl of hot water, and he will inhale the steam to make himself feel better. He will then vomit up the phlegmatic bead. Pick the bead out of the vomit, and if you wish, talk to him again to learn more about why he was given the bead. 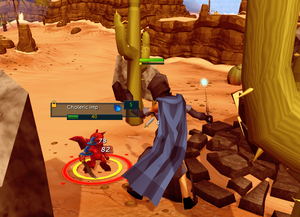 The fight with the Choleric imp

The yellow choleric bead is held by the choleric imp, found next to the Fire altar to the north of Al Kharid, which is a short walk from Lumbridge Swamp. Speak to the imp, and he will take out his aggression by attacking you. He has the same stats as a regular imp, so should not be too difficult to defeat.

Once beaten, he will calm down slightly, and explain that he's been feeling angrier after swallowing a yellow bead, which he will proceed to vomit up. Take the bead, and optionally speak to him again to learn that Grayzag is working with Azacorax.

The black melancholic bead is held by the melancholic imp, found next to the Earth altar to the north-east of Varrock, just south of the Lumber Yard, and north of Al Kharid. Speak to the imp to find out he is suffering from depression after swallowing a black bead he was supposed to be safeguarding. To make him feel a bit better, select the following chat options:

He will then feel happier knowing that things will eventually get better, and proceeds to vomit up the bead. Take the bead from the vomit, and if you wish, speak to him again to learn more about Grayzag and Azacorax. 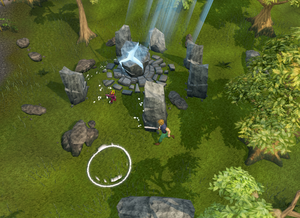 The red sanguine bead is held by the sanguine imp, found next to the Air altar to the west of Varrock, and east of Barbarian Village. Speak to him to find out he is extremely hyperactive, and you will suggest he get some exercise by racing you around the air altar. He will agree to this, and the race will begin after a short countdown.

To win the race, simply run to the checkpoints around the altar as they appear. While the imp will initially be very quick, he will gradually lose energy and slow down, allowing you to overtake him and win. Once you win, he will feel more relaxed and vomit up the bead. Pick up the bead, and optionally talk to him again to learn more, although unlike the other imps he will not say much.

Once you have the four beads, return to Wizard Mizgog and give them to him, and he will be overjoyed. He will then put them on his desk, and reward you with an amulet of accuracy. 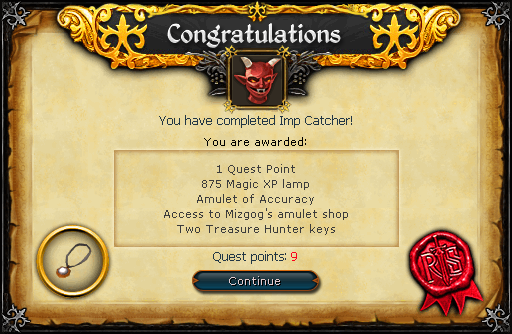 Imp Catcher is directly required for the following quests/miniquests: