Imcando pickaxe (e) was an enchanted gilded dragon pickaxe that has previously been combined by Thurgo using components from the Lava Flow Mine. The ability to obtain it was removed with the Mining and Smithing rework on 7 January 2019, any existing enchanted pickaxes replaced with unenchanted imcando pickaxes.

This version was obtained when the Imcando pickaxe is first made (along with 100 enchantment points), and could be recharged by mining a lava geyser in the Lava Flow Mine.

When this item ran out of charges, it changed to the uncharged version.

Mining with it successfully grants 20% additional mining experience at the cost of one enchantment point (stacks with other experience boosts).

Charges can be regained through mining a lava geyser in the Lava Flow Mine again. Only 1 geyser has to be mined to obtain all 100 charges again. 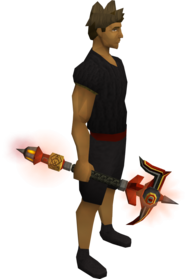