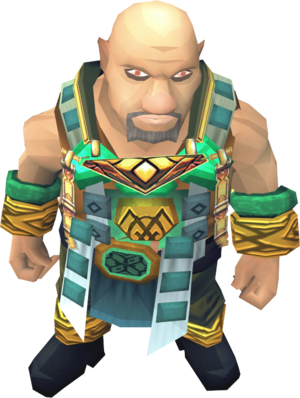 The Imcando dwarves are an ancient clan of dwarves who fought for Saradomin during the God Wars and are still able to use magic. The Imcando are skilled smiths, having created the original sword of Sir Vyvin's family in the Knight's Sword. The Imcando once inhabited a great hall known as Camdozaal in Ice Mountain, however after the destruction of the Barbarian invasions they are believed to have scattered throughout Asgarnia.

Apart from being master smiths, Imcando dwarves are known to have an insatiable appetite for redberry pie.

In the early Second Age, multiple dwarven clans abandoned the Path of Guthix and began to worship Saradomin. They proceeded to teach their new Saradominist allies the secret of smithing Adamant, which caused a rift between the Saradominist and Guthixian clans that lasted for thousands of years. Over the years the Saradominist clans made several breakthroughs in metallurgy, discovering in the Second and Third Age how to make rune and orikalkum respectively.[1]

Whereas the Guthixian clans fled underground during the God Wars, the Saradominist clans fought for Saradomin. Most of these clans did not survive the God Wars, and by the end of the Third Age, only the Imcando Dwarves were left in any significant number.[2] At some point during the God Wars, Zamorak cursed the dwarven race in an attempt to bolster his forces.[3][4] Although this forced the underground Guthixian clans to strip themselves of magic lest they turn into chaos dwarves, Saradomin managed to protect the Imcando dwarves, allowing them to continue to use magic.[3] Consequently, the Imcando dwarves were noted for their fanatical faith in Saradomin and their advanced magical abilities,[2] which they combined with technology to create fantastical siege engines, ranging from fire throwers to giant mechanical spiders.[5]

The dwarven clans were initially organised into an exclusively dwarven unit known as a tourma, led by a tetrarch, who represented the entire dwarven race to Saradomin,[6] but by the end of the God Wars the tetrarchs' influence in Saradomin's army waned as Saradomin reorganised his armies into integrated units, where the Imcando dwarves fought side-by-side members of other races.[7]

One Imcando dwarf, Thalmund, was captured by goblins during the God Wars and brought to Bandos, who demanded that Thalmund make weapons and armour for his armies. Fearing for his life, Thalmund agreed, but much to his chagrin he was given a substandard workshop, where Bandos insisted that he use bronze to make his weapons since it was cheaper and more abundant than steel.

Thalmund built a specialized forge in the depths of the cave, which came to be known as the Warforge. During the time he spent there, Thalmund grew to care for the goblins to the point that he considered them family. When Bandos abandoned the Warforge at the end of the Third Age, trapping his followers inside, Thalmund took pity on them and used explosives to dig their way out. The Warforge subsequently faded into legend over the following centuries, until it was rediscovered during the Sixth Age.

Arrav, after meeting Zemouregal in the Land of Dreams, was sent by his village's elders to find the mythical Shield of Arrav, in the possession of the Imcando dwarves. After wandering through what would later become Asgarnia, Arrav settled at the foot of a mountain, possibly Ice Mountain where he was greeted by several Imcando. Despite their refusals of knowing the Shield, Arrav stayed with them, hoping to gain their trust. After spending many days with the Imcando and learning their arts of mining and smithing he was refused the Shield.

Some time later, Arrav was given the Shield, which he used to defend Avarrocka (now Varrock) from an army of undead, led by Zemouregal. Amongst those protecting the city were the Imcando, who fought as soldiers and dug trenches. Arrav was killed in the battle, but the Imcando remained friends of Varrock.

Roughly a century ago, during the Barbarian invasions of the years 42-62 in the Fifth Age, the thriving Imcando dwarves were nearly rendered extinct.

The White Knights of Falador had given the Imcando Dwarves many fire and nature runes, allowing them to cast the Superheat Item spell. The Fremennik invaders, who sought to end the use of the newly discovered runestones, attacked the Imcando in their home on Ice Mountain.

Few Imcando escaped the massacre, with those who escaped Ice Mountain scattered into the nearby area and in hiding. Thurgo is the only one who willingly reveals himself, although he conceals his identity to those who haven't obtained his trust.

Up to their destruction the Imcando tribe of Dwarves were particularly skilled in Smithing weaponry, and possibly Mining. As mentioned above the sword of Sir Vyvin, passed down through five generations, was created by the Imcando. For many centuries they were the world's most renowned, and best, smiths. This is shown by Thurgo, who owns a Smithing cape, and is also capable of assisting players in creating royal crossbows, Imcando pickaxes and mattocks. The techniques used by the Imcando were secret, passed down from generation to generation, and any items created by the Imcando are very hard to replicate. The Imcando utilise blurite as weaponry in the form of ranged weapons; no other race has been documented using blurite weaponry, and the ones smithed for melee purposes are generally for decorative and ceremonial purposes.

The Imcando smith Thalmund created warforged bronze in response to Bandos' request of bronze weaponry for his goblins and the inferior metal he was given to work with; warforged bronze's examine text states that it was superior to some forms of steel, which were in use by the top factions during the Third Age.