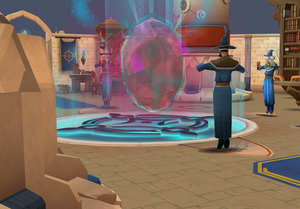 Icyenic Purge is a spell cast by the senior members of the Wizards' Tower, where they send a powerful surge of energy through the power beam to, as the name suggests, purge it. This spell is cast in the quest Rune Mysteries to stop red, blue, green, and grey vortices from going inside the Wizards' Tower.

The current wizards of the Wizard Tower are Saradominists, and this spell contains some resemblance to the Icyene who were a race who obeyed to Saradomin. Saradomin's own general, Commander Zilyana, is an Icyene.