From the RuneScape Wiki, the wiki for all things RuneScape
Jump to navigation Jump to search
The Old School RuneScape Wiki also has an article on: osrsw:Icyene

The icyene are a race of incredibly long-lived winged beings who arrived in Gielinor before the God Wars. The icyene are generally (though not always) aligned to the god Saradomin and are some of his most powerful followers. They are originally from the realm of Hallow which was also home to the skypouncer.[1]

Although icyene visually resemble humans, this likeness appears to be only skin deep. An Icyene's internal anatomy is noted to be utterly alien to a human, even one versed in medicine.[2] Moreover, some icyene possess dark blue skin,[3]which is beyond the usual range of pigmentation found in humans. Icyene are also generally taller[3][4]and physically stronger[5]than most humans; and they can live for thousands of years. Nevertheless, icyene and humans are able to interbreed, as seen with Safalaan Hallow.

Icyene have wings which they can use to fly. At a minimum, all icyene appear to be born with a single set of wings, protruding from near their shoulder blades, but some icyene also have a second set of wings on their lower back.[6] 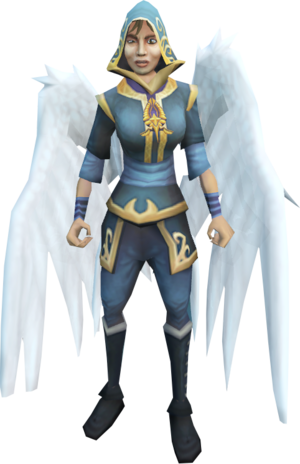 Hailing from Hallow, the icyene have made the planet their home for thousands of years. Great value was placed on their wings, the removal of which meant humiliation and disfigurement, or in the case on their home planet, almost certain death.

Icyene culture was shaped from the living conditions of Hallow, where the planet had long night cycles which spelled certain doom for any icyene that remained in the darkness. Therefore, the icyene built their capital, New Domina, with technology that allowed it to catch up with the sun, giving them endless quantities of sunlight. The icyene are generally considered to be followers of the light, both literally and figuratively. Outside of the capital, the icyene pre-built villages and other establishments, which were in use whenever the light bore down upon it. When the darkness approached, the icyene in those areas quickly packed up and moved on to the next set of islands.

The icyene encountered Saradomin, who found their ideals similar to his own. They saw Saradomin as a benevolent being, and eagerly followed their new god. Saradomin took a majority of the icyene specialising in martial ability with him to Gielinor. Efaritay was among them. There are still icyene living in Hallow, presumably many of which are farmers.

Their territory on the new planet was called the Hallowland, known as Morytania in the present day. Notable cities were the first settlement and lighthouse of Everlight, and the capital of Hallowvale. Due to their ability to fly, coupled with their martial prowess, the icyene were a mighty addition to Saradomin's armies for any war that would come. The icyene could hold off Lowerniel Drakan's vampyres with their capability of overriding the vampyres' innate ability to predict attacks and their wings allowing them to efficiently fight the Vyrewatch. However, Drakan took the upper hand when his vampyres captured Queen Efaritay's husband, Ascertes, and the majority of the military icyene had fled under Archon Bable's orders, though their fate remains unknown. 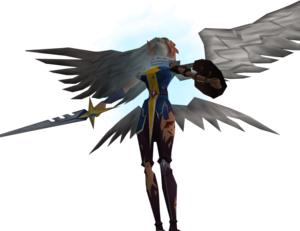 Commander Zilyana is healed by Saradomin during the Wars.

After Efaritay's surrender, almost all the remaining icyene were captured under Drakan's orders, subjected to haemalchemy and converted into vyrewatch or wyrds, the latter of which were destroyed when Drakan realised they were uncontrollable. Many of the icyene underwent a secret ritual to keep their souls redeemable when they could be liberated. [7]

The icyene across Gielinor fought throughout the God Wars. After Guthix expelled all other gods from the plane, Saradomin took what remained of his army back to New Domina, where they would be quickly deployed to end a civil war that had erupted during his absence.

There are currently four known full-blooded icyene alive on Gielinor in the Sixth Age. The first is Commander Zilyana, who led Saradomin's army during the battle of the Godsword, a weapon which was planned to be used to destroy Zamorak. She survived the God Wars because the dungeon in which the battle was held was frozen by Guthix, in the act which put an end to the God Wars. The dungeon thawed during Year 169 of the Fifth Age, along with all the armies within it, and Commander Zilyana still resides there with her armies, although she left briefly during the events surrounding Guthix's death, as well as during other instances to support or represent Saradomin. Not much is known about Padomenes, the icyene who led Saradomin's army during the Battle of Lumbridge, though he continues to train recruits at White Knights' Castle. The third is Garlandia, a member of the Godless faction who currently resides north of Falador with Kara-Meir. She turned away from Saradomin after he publicly tore her wings off for not wishing to fight in his armies. The last is Efaritay, once Queen of Hallowvale, kept prisoner by Lord Drakan for over 6000 years. She escaped in the Year 169 of the Fifth Age after Lord Drakan was killed; she now resides on top of Castle Drakan after River of Blood.

In The Branches of Darkmeyer, it's revealed that Safalaan Hallow is a half-blood icyene, something that was long speculated due to the fact that he has the same surname as Queen Efaritay, as well as his size, colour of eyes, and mysterious powers that he displays in the quest Legacy of Seergaze. He was one of the leaders of the Myreque resistance against the Drakans, an occupation for which his icyene powers are very useful. Safalaan was the son of Queen Efaritay and Ascertes, making him the only half-blood icyene currently known. Safalaan was eventually "killed" by Vanescula Drakan during The Lord of Vampyrium so she could cross the River Salve in an attempt to reconquer Misthalin.

A statue of an icyene on the Abbey of St. Elspeth Citharede