In the 2008 Christmas Event, Jack Frost left many patches of ice around RuneScape. If a player stepped onto the ice, they would skate across until they hit something. This technique was also used to defeat Jack when the player found him without actually dealing any damage to him. Players can skate all year round in some parts of the Land of Snow, during and after the quest Myths of the White Lands.

There are also puzzles in the frozen floors of dungeoneering in which players must skate to the other side of the room. 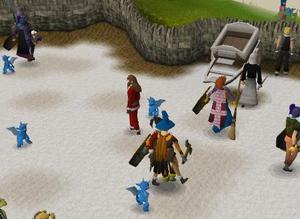 Players 'ice-skating' at the 2008 Christmas Event.