The Ice Queen is an ice sprite and the exiled elder sister of the Queen of Snow. She can be found in the Ice Queen's lair under White Wolf Mountain, which requires 50 Mining to enter. She is fairly strong for a level 77 monster, however her only method of attack is punching. However, the ice warriors nearby will become aggressive towards players if they attack the Queen, regardless of combat level. Protect from Melee or Deflect Melee will reduce the damage from the Ice Queen and her minions. The Queen has no explicit weakness, but ranged is advisable over melee and magic as her ranged defence is lowest. 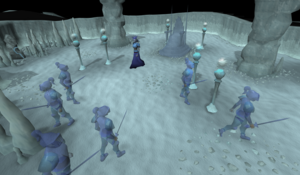