The Ice Queen's Lair is a dungeon, located under the White Wolf Mountain. Level 50 Mining and a pickaxe are required to remove the rockslide to gain access. The most iconic reason to visit is for players to slay the Ice Queen to obtain her ice gloves, which are required for several quests. Near the throne, players may find a small obelisk. The lair is also a location for a Scan clue with an elite clue scroll.

Head to White Wolf Mountain. The closest teleport is the Taverley teleport using the lodestone system.

From Taverley walk up the eastern side of the mountain and enter the cave just west of Grimgnash which places you on the summit near 3 trapdoors. Just east of the trapdoors is a mine-able rock slide blocking the way to 3 ladders - mine it and you will automatically walk through (50 mining required). Alternatively, have a friend mine the rock slide and walk through with them.

When attempting to defeat the Ice Queen, if a player stands to the eastern side of the Queen's throne, the surrounding warriors will not be able to continue following the player, while the player can still be set in a position to attack the Ice Queen. 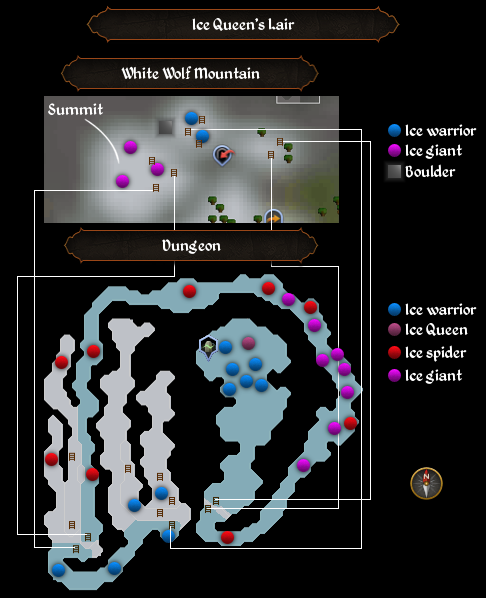 This information has been compiled as part of the update history project. Some updates may not be included - see here for how to help out!
Retrieved from ‘https://runescape.wiki/w/Ice_Queen%27s_Lair?oldid=35744893’
Categories:
Hidden category: