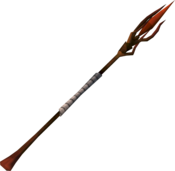 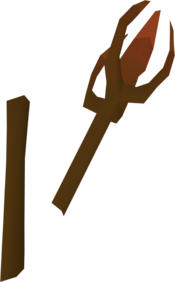 Iban's staff is obtained by defeating the evil mage Iban in the Underground Pass quest and requires 50 Magic to wield. Its stats are typical of a mid-range staff, being on par with the lunar staff. It does not provide unlimited runes of any kind. It does, however, have a special attack known as Iban Blast.

If the staff is lost, the player must kill a disciple of Iban and he will drop a broken Iban's staff. To reach the disciples after the quest, simply teleport to the death rune altar, enter the tunnel, run north, past all the souless, until you see an "Ascend Cave Stairs" tunnel. Go up the stairs and run east along the wall then south along the wall. Jump over the bridges to reach the disciples. The disciples will not drop the broken staff if the player already possesses an unbroken or broken Iban's staff. The broken staff can be repaired by the dark mage in the small building near the entrance of the Underground Pass, in West Ardougne for 200,000 coins.

The special attack of Iban's staff is called Iban Blast. This fires a flaming skull at the target, dealing 130-250% spell damage to the target and draining 25% of the user's adrenaline or special attack energy. At maximum adrenaline, this can be chained together up to four times in a row to deal a high amount of damage.

Before the Evolution of Combat, Iban's staff could be used like any magic staff to cast attack spells and had the autocast option for these spells. Iban's staff was needed to cast the Iban Blast spell, and was also able to autocast that spell. The staff had 120 charges in which to cast Iban Blast. Once the charges were exhausted, the staff couldn't cast Iban Blast but could still be used as a magic staff for other spells. The staff lost one charge when casting the spell on a monster, and lost two charges when casting it on a player.

The staff could be recharged fully by using it on the Flames of Zamorak well in the Underground Pass dungeon, which is the first well past the three paladins fought in the quest.