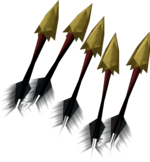 Ascendri bolts (e) and Hydrix bakriminel bolts (e) have a 10% chance of triggering the Deathmark effect, which instantly grants the player 10% adrenaline and additional 1% from basic abilities for 15 seconds. Subsequent activations while under the effect of Deathmark will refresh the effect. The effect of Deathmark will remain active after switching ammunition or even switching weapons.

There is a bug, however, where using ascendri bolts (e) outside of a quiver (Tirannwn or Pernix) will cause the effect of Deathmark to fade upon switching bolts. This is negated simply by putting them in a quiver.

This effect can be triggered with auto attacks and abilities, with abilities consuming one bolt per activation. Multi-target abilities such as Ricochet can trigger the effect separately on secondary targets. Abilities that hit multiple times such as Rapid Fire have a chance to trigger it on each hit separately.

The abilities Fragmentation Shot, Corruption Shot, Incendiary Shot, and the bleed effect of Deadshot can not trigger the passive effect of bakriminel bolts.

Onslaught can trigger the effect, although adrenaline gained after the 1st recoil hit will be immediately drained and doesn't stop its self-harm effect despite gaining adrenaline.

This information has been compiled as part of the update history project. Some updates may not be included - see here for how to help out!
Retrieved from ‘https://runescape.wiki/w/Hydrix_bakriminel_bolts_(e)?oldid=35901325’
Categories:
Hidden categories: