From the RuneScape Wiki, the wiki for all things RuneScape
Jump to: navigation, search
This article is about minigame armour. For the armour class, see Armour/Hybrid armour.

Hybrid armour is a type of minigame-exclusive armour requiring level 85 Defence, along with other requirements such as Strength, Ranged, and Magic (depending on the kind of armour) to wear. If these requirements are not met, it is still possible obtain any of the hybrid armour pieces, but they will not be equippable until the requirements have been met.

Hybrid armour is purely cosmetic except when worn in the following PvP minigames:

While hybrid armour is obtained from Pest Control, it provides no bonuses in the minigame when worn.

When wearing hybrid armour in the above listed minigames, extra damage will be dealt against other players. For each piece worn, an additional 3% of damage will be dealt. Only the set with the most pieces will account for the damage boost, meaning mixing sets will not grant higher bonus damage, though the defensive stats will remain the same. This means if three pieces of battle-mage and two pieces of vanguard are worn, only 9% additional damage will be dealt instead of 15%. While wearing the full set of hybrid armour, a total of 15% extra damage is dealt on other players. In Castle Wars, this damage bonus does not stack with the Castle Wars armour sets.

Each set offensively supports every style (meaning no attack ratings will be lost on any style) and is defensively weak to one attack style. Battle-mage is weak to magic, Trickster to ranged, and Vanguard to melee.

The three types of hybrid armour are as follows: 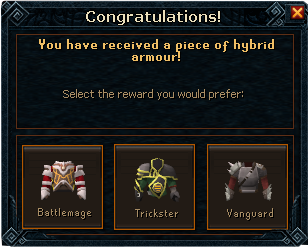 Armour pieces are obtained after winning in the minigames stated below. An interface will appear from which you can choose which set you would like the item to be. This item will then appear in your inventory. If your inventory is full when the interface pops up, you are allowed to drop an item without the hybrid drop interface closing. The random chance of getting a piece improves as you win more games. Therefore the more games you win, the better chance you have of obtaining a piece of armour.

If the interface closes by accident (like when your familiar re-appears next to you) you will get a second chance and it will open again for you to choose what piece you want. The interface will only re-open once.

Alternatively, these equipment pieces can be bought using thaler, at the cost of 700 thaler a piece.

The items can be received as follows:

Body from TzHaar Fight Pit - It is unknown how many games are needed to be played in order to receive this piece of hybrid armour, but reports show that most players acquire their first piece at around 200 to 250 wins which is equivalent to 8 to 9 hours in total. All 3 pieces can take approximately 300 wins. If boosting, it will take around 90 seconds per win, assuming your partner forfeits after the fight signal is given. You must click the "Click here to continue" button in the text box after you win for a chance for the Hybrid interface.

Helmet from Castle Wars - On average, over 60-80 wins is the number at which most people start receiving one, which is equivalent to around 120-160 Castle war tickets and 23-30 hours of gameplay, including the 3 minute wait. The first time you get a piece, the selection interface appears before, then, after the end game interface appears. After getting your first hybrid helmet, the other two will take at most 10-15 more wins.

Gloves from Fist of Guthix- On average, 150 wins is the number at which most people start getting them. In terms of rating, it has been reported that an average increase of 1500 to 1600 rating accompanies getting all 3 pairs. While playing Fist of Guthix in a F2P world, it is not possible to obtain the gloves; however, games won in free to play will count towards increasing the chance to obtaining them.

Boots from Pest Control - On average, 550 wins is the number at which most people start getting them; which is equivalent to over 1,100 commendations from Novice lander, and 2,200 commendations from Veteran lander. However, in order to get all 3 you must play an upwards of 600 to 700 games. World 53 is the official world for Pest Control, with world 69 as an alternative. Take the Novice boat and with a group of high levels for maximum efficiency. In order to receive the interface for choosing a pair of boots, you must click through the squire's dialogue after a successful game, the interface does not appear until the squire's dialogue is finished.

Bottom from Soul Wars - On average, 115 wins which is equivalent to 345-445 zeal or 40 hours game time, is the number at which most players start receiving them. World 44 is the official world for Soul Wars. Getting all 3 hybrid bottoms may also require considerably more wins. It is required to click through Nomad/Zimberfizz/Zanik's end game dialogue to get the drop interface to appear. However, if the game is completed and you are in "Ghost-form", the click-to-continue dialogue at the end of the game may close, though it does not prevent the interface from appearing.