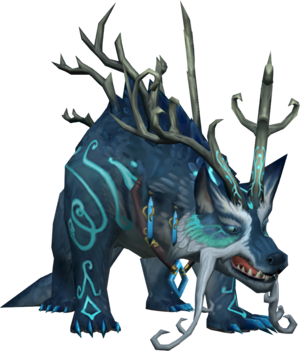 Helwyr in the form of the Hunllef

The Hunllef was an ancient creature, only mentioned in the Ancient Tarddian Journal, that frightened the elves of Tarddiad. The Cywir Clan tried to keep it away with the Great Flame, but when the Crwys Clan stopped supplying logs it eventually went out. Skil Lage took wordweavers to its lair to seal it away, sacrificing all but one in the process. Some time later, Helwyr, the leader of the Cywir elves, entered the cave and slew the beast, absorbing the Hunllef's energy, bending it to take on the beast's form himself.