From the RuneScape Wiki, the wiki for all things RuneScape
(Redirected from Human Realm)
Jump to navigation Jump to search 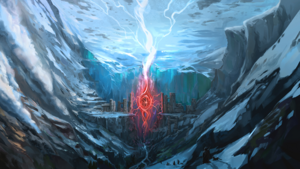 Concept art of Teragard, from RuneFest 2016. 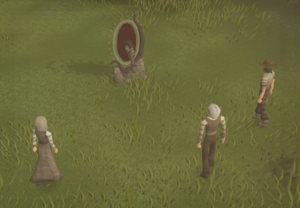 The humans arrive from their own realm to Gielinor.

Teragard is the world where humans, and Saradomin, originated.[1] It is characterised by intense cold, vast mountain ranges and long fjords.[2] The humans of Teragard are considered as cold as the climate, and see themselves as superior to the other humans throughout the cosmos because they come from humanity's homeworld.[3] They are proud and isolationist, unlikely to leave their planet without good reason.[4]

Lacking runestones, the people of Teragard instead use an interdimensional portal known as the Schism to power arcane devices. The Schism is tightly controlled by the magisters, the theocratic rulers of the planet.[3]

Over twelve thousand years ago, Saradomin was a justicar, a lawman, on Teragard.[5] During this time Teragard was divided between various nations, fighting over territory.[1] In pursuit of a criminal, Saradomin happened upon the Elder Crown, one of the tools used by the Elder Gods to create the universe. With the Crown, he discovered powerful magical artefacts, and he endeavoured to reshape Teragard and unite its disparate nations. Eventually, Saradomin came to discover that he did not need the artefacts to wield power, and thus affirmed himself as Teragard's god.[5]

As the god of Teragard, Saradomin instated a theocratic system of government. He chose twelve priests and teachers, termed magisters, to act with his authority. They were each to govern a different part of the world and given a mandate to improve humanity through his teachings. Saradomin eventually grew content with Teragard, believing that he had ushered in a golden age of enlightenment, and left in search of other worlds to uplift.[1] He also began seeding human colonists on other worlds in the universe.[3]

Early in Gielinor's Third Age, the Fire Warrior of Lesarkus was dispatched by the magisters as a scout to Gielinor to test the natives. Following a massacre, the Fire Warrior allied himself with the Ikovians as a form of repentance and has guarded the Temple of Ikov since.

In Saradomin's absence, the magisters eventually began to fight amongst themselves, vying for power. By the first century of Gielinor's Fourth Age, only seven magisters remained. Robert the Strong came from Teragard to Gielinor via the Schism at this time,[3] and later became one of Gielinor's most revered champions through his conflict with the Dragonkin.

Oreb, a magister from the disgraced house of Charron, came to Gielinor sometime in the Fourth or Fifth Age, looking for the means to restore his house to power.

In the present day, Saradomin has yet to return to Teragard. Meanwhile, the magisters use their own conception of Saradomin and interpretations of his teachings to control the populace.

The whole of Teragard is ruled by seven Magisters from seven ruling families of Teragard. It is they who officiate over law, tradition, and religion within the world.[3] Originally, there were twelve families of Magisters, but due to familicide, caused by the fact only the head of the family is a Magister, in order to gain power, some families have died out. The families were put into power by Saradomin himself after ascending to godhood, however, he has not been back for several centuries, so the Saradomin that is worshipped by the Teragardians is but an image of fear that the Magisters use by which to rule and subjugate their people.

The Inquisitorial Court are the knights and soldiers commanded by the Magisters to enforce their laws, assist in cultivating this false image of Saradomin, and to enforce their rule, making them seem, to the people of Teragard, as above all others, save Saradomin himself.

One of the most notable features of Teragard is an anomaly known as the Schism; a literal hole in reality, leading into the Abyss. Crackling with red lightning and dimensional energy, the Magisters use its power as an energy source; channelling the lightning into obelisks and harnessing the power. This power is their type of magic, considered to be a combination of magic and science.

Early Teragardians also used the Schism as a means to colonise other worlds. Among them was the Fremennik Colony World. Teragard has since lost contact with its colonies, however, well before the First Age; although they still use it.