From the RuneScape Wiki, the wiki for all things RuneScape
Jump to navigation Jump to search
The Old School RuneScape Wiki also has an article on: osrsw:Hotspot
For the locations at Archaeology dig sites, see Excavation hotspot.
Not to be confused with Hot zone. 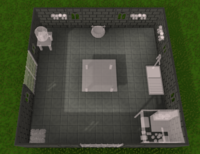 Centrepiece hotspot in a Kitchen

A hotspot is a pre-defined place to build a specific type of furniture in a player-owned house used in the Construction skill. Hotspot locations cannot be changed by players, unless the room is removed and rebuilt in a different way.

When the player is in Building mode, vacant hotspots appear as ghostly figures of the lowest piece of furniture that can be built there. Hotspots, that have not been built on, do not appear while Building mode is OFF.

A handful of hotspots also appear outside of player-owned houses. Players with at least 18 Construction have the option to build rope racks in some of the Eagle's aerie as well as other locations. Starting at construction level 29, as well as having the appropriate Strength, Agility and Ranged levels, up to six hidey-holes may be built to store a crossbow and grapple for Agility Shortcuts.

Clicking on a hotspot will open up the Furniture Creation Menu, showing a list of furniture that can be built, the required Construction level, and the materials required.

Also, a player can assemble flatpacks at a hotspot, given that the type of flatpack corresponds to the hotspot it is being assembled at. To set up a flatpack a player must simply use the flatpack with the hotspot. There is no skill requirement for setting up a flatpack but no xp is gained.

After the desired furniture has been chosen, a short animation showing the player hammering will occur. Once built, the furniture will appear solid, both in and out of building mode. The player can then use the built furniture.