The hooded mining cape is the Cape of Accomplishment for the Mining skill. It can be purchased for 99,000 coins alongside the Mining hood from Gadrin at the Mining Guild entrance by players who have achieved level 99 Mining. Mining capes are brown-greyish in colour, have the mining skill icon, and have a light blue trim if the player has more than one level 99 skill.

The Hooded mining cape's perk provides a 5% double ore chance on all core rocks. Whenever double ore is received, bonus XP equal to the level requirement to mine that rock is awarded. 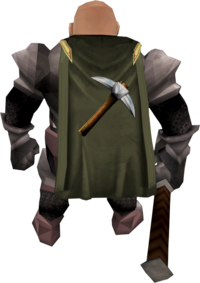