From the RuneScape Wiki, the wiki for all things RuneScape
(Redirected from Honour Guard)
Jump to navigation Jump to search
The Old School RuneScape Wiki also has an article on: osrsw:Honour guard

Honour guards are unattackable NPCs with a combat level of 70. They assist the player in killing 10 ice trolls in the final battle of The Fremennik Isles, and are also found wandering around the front gates of Neitiznot. They are also found in the icy areas north of the main village of Neitiznot, usually fighting Ice troll runts. They are good assistance during ranged training, as they make perfect solid blockades and can provide extra muscle when needed.

Players on a troll slayer assignment may kill those that the Honour guards are killing for their task. Causing at least one life point of damage to the troll is enough to count towards their task.

They appear to be wearing yak-hide armour, a Fremennik round shield, a fremennik blade, a brown Fremennik cloak, leather gloves and boots and a Fremennik helmet. 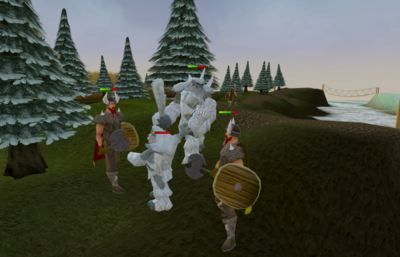