Holy Grail is the second and penultimate quest of the Camelot quest series, where you must help King Arthur find the holy grail. The grail is found to be missing from its original location in Entrana, protected by the Fisher King in the Fisher Realm.

King Arthur is sending out his knights on a quest for the famous Holy Grail.

If you are a Knight of the Round Table, go to King Arthur for further orders.

Talk to King Arthur in Camelot Castle, and he will tell you about an ancient artefact called the holy grail. He mentions that the grail has been moved into the realm of RuneScape, and his Knights of the Round Table are currently looking for it.

You offer to help your associates in their quest, and Arthur accepts, asking you to consult Merlin for more information. Merlin, in his office located on the 1st floor[UK]2nd floor[US] of the castle, believes the grail's exact location may be known to Sir Galahad, as he was the last knight to come back from the quest, visibly changed. He also mentions speaking to the high priest of Entrana, the last known location of the grail.

Even though Merlin specifically tells you to speak with Galahad, you must visit Entrana prior to meeting him.

Dismiss your familiar and bank any weapons and armour you may have, and take a boat from Port Sarim to Entrana. Alternative methods include travelling via the hot air balloon, using the Abyss to access the law altar, or teleporting to the Law Altar via the wicked hood.

Speak to the high priest, who is in the main chapel of the church. He discloses that the holy grail, unfortunately, is no longer on the island. While the priest is speaking, suddenly, a strange old crone appears and states that the Fisher King, the protector of the grail, is in trouble!

To help the King, you must travel to his realm using a magic whistle. The crone says that the whistle can be found in "a haunted manor house in Misthalin", although you need an object from the realm to be able to see it. Since the Fisher Realm is a reality different from this one, you need to blow the whistle at the point where it's easiest to cross through. The specific location is found by triangulating the directions in which the 4 mysterious statues face. The 4 statue locations are as follow: east of the Seers' Village bank, south of the Fishing Guild, north of the Tower of Life, and west of the Brimhaven POH portal.

The location to blow the whistle

Make your way to Sir Galahad, located in a building west of Seers' Village and McGrubor's Wood and east of the coal trucks, and talk to him. Tell him you're on a quest for the holy grail, on which he reminisces. Ask him why he left, and after some more nostalgia, he reluctantly gives you a holy table napkin, a souvenir he took from the Fisher Realm.

Now head to the top floor of the Draynor Manor and into the southern room. Pick up both magic whistles on the table – they are only visible when you walk into the room with the holy table napkin in your possession.

Have the Excalibur, magic whistle, a weapon, armour, and some food with you. Head to where the stone faces point, which is under a tower on the north-west part of Brimhaven. Stand under the watchtower and blow the whistle to be teleported to the Fisher King's Realm.

You find yourself in a gloomy, mucky area where decay fogs the land. Walk north-west and you'll meet up with the Black Knight Titan, standing on an extremely narrow bridge. The Titan refuses to budge and won't let you through without a match.

The titan must be killed with the Excalibur blade only, although you may use other weapons to bring down his health. The titan has no specific weakness to an attack style.

Using abilities like Slice, Backhand, Wrack, and Asphyxiate can considerably reduce your battle time. He doesn't move, so you can walk away at low health to eat without being damaged. Once the titan is at low health, wield the Excalibur and finish him off. If you do not use Excalibur for the final blow, he'll regenerate all his health and you must fight him again.

After you have killed him, cross the bridge and head slightly south-east to the fisherman by the river and talk to him. Ask him for a way to get inside the castle, to which he suggests ringing a grail bell by the entrance. Make your way south-west to the castle, take the grail bell lying on the ground, near the pile of bricks, and ring it to enter the castle. If the bell does not appear, talk to the fisherman again.

If you didn't get the spare whistle while in Draynor Manor, do so now. There is one on the floor of the castle and one on a table on the ground floor[UK]1st floor[US].

Go directly south and head upstairs and speak to the Fisher King. He welcomes you to his realm, saying that the crone and the fisherman were there only to guide you to him. Legends say that one day a "questing knight" would restore the dark land to its former glory and claim the grail for themself.

The King mentions that he is dying and wants to meet his son before he departs. His son, Sir Percival, is one of Arthur's Knights of the Round Table. If you do not ask him about his son, you'll have to do it all over again.

Head to Camelot and speak to King Arthur. Though he does not know where Percival is, he gives you a magic gold feather which points to the golden boots of Arkaneeses that Percival was seeking. 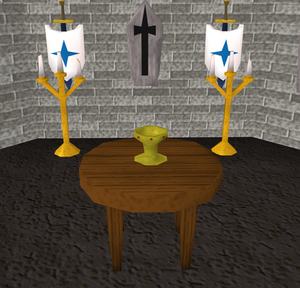 The holy grail on the table

Blow on the feather and it will guide you towards the Goblin Village. Keeping the feather in your inventory, teleport to the Falador lodestone and run north to the Goblin Village. Inside the village, head into the east house and open the sacks to find Sir Percival. He sheepishly admits to getting caught in a goblin trap, after which the goblins bound him in a sack, later forgetting about him. Tell him his father wishes to see him; Percival doesn't know how to get to the castle, so give him your second magic whistle.

Return to the Fisher King's Realm once more by blowing the whistle under the tower north-west of Brimhaven. If you have access to the fairy rings you may also get there with the code BJR. Head back into the castle and go up the staircase and ladder in the eastern-most room, climbing all the way up. Pick up the holy grail from the table and head back to Camelot, presenting it to King Arthur. 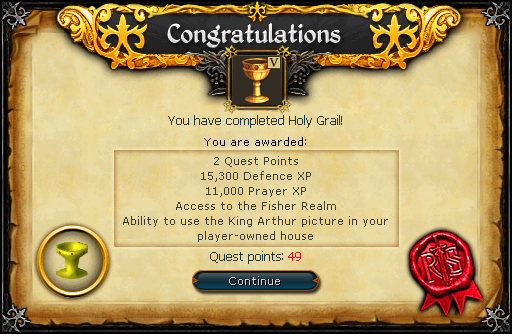 These music tracks are unlocked when in Brimhaven, no music is unique to this quest.

Holy Grail is directly required for the following quests/miniquests: