Holstein, Emissary of the Godless

Holstein is a member and emissary of The Godless, a group founded in the Sixth Age that opposes all gods. He can be found in northern Port Sarim, advertising his organisation. Holstein is apparently well-travelled, having visited the Wilderness, Morytania and even Prifddinas. According to him, if one chooses to follow no gods, the faction will help to defend the world against them. He will give various tasks to complete if you join The Godless. Holstein will also hand a banner of the Godless and a Book of the Gods. The title "[Name] of the Godless" may be activated through this emissary.

Holstein makes an appearance during the Cabbage Facepunch Bonanza in Lumbridge, where he tries to bring order against the two "warring" factions, Marimbo and Brassica Prime. He has difficulty in having either of them take his actions seriously, as Marimbo repeatedly tries to flirt with him, while Brassica Prime sees Holstein as a homeless person in the nude due to his costume, and offers him leaves to "protect his fleshy body". Holstein mentions that initially Kara-Meir came to Lumbridge to protest against the two gods, but was insulted and pelted with cabbages and monkey feces, which is when Holstein took over.

Transcripts Holstein, Emissary of the Godless speaks in: 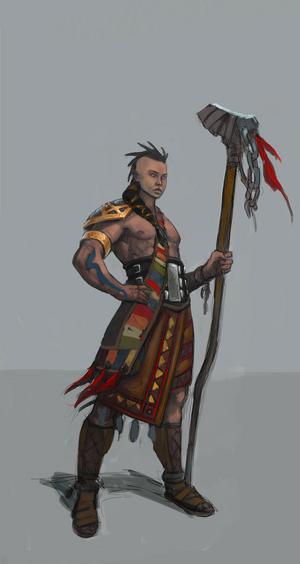