From the RuneScape Wiki, the wiki for all things RuneScape
Jump to navigation Jump to search
The Old School RuneScape Wiki also has an article on: osrsw:Hitsplat

A hitsplat denoting a missed attack.

Hitsplat (also called hit splat or hitmark) is a term used to refer to the damage icon appearing on a player, an NPC, or a monster, while in combat. A hitsplat usually results in a change of life points. Most hitsplats have a number in the centre, which displays the number of life points that the recipient has either lost or gained. Depending on how large the number is, the width of a splat is variable. A hitsplat without a number denotes a missed or blocked hit, or temporary immunity to damage.

Most hits use the Arial font, while a player's critical hits use a special font to put emphasis on it. 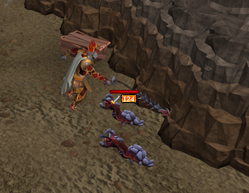 A golden hitsplat, which is used to represent a critical hit in Legacy Mode.

The colour of the hitsplat and the symbol beside it usually give an indication of the type of damage and the number inside the amount of damage dealt. Hitsplat depicts the magnitude effect of an attack; however, a block or miss will always induce a 0, but the randomisation result is never shown.

This information has been compiled as part of the update history project. Some updates may not be included - see here for how to help out!
Retrieved from ‘https://runescape.wiki/w/Hitsplat?oldid=35741579’
Categories:
Hidden category: