From the RuneScape Wiki, the wiki for all things RuneScape
Jump to: navigation, search
Hetite stone? (edit) 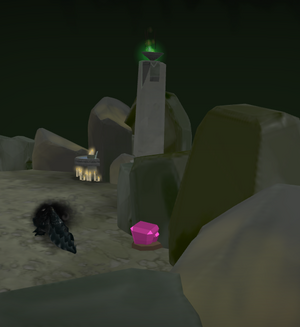 Hetite stone near the crocodile akh

Hetite stone is one of the Jewels of the Elid found in the Sophanem Slayer Dungeon. Collecting all 16 gems grants the Jewelled Scarab pet and completes the Rock and Roll achievement. The location is random for everyone, and it only spawns while on a corrupted creatures or soul devourers task. The hetite stone appears as a red dot on the minimap.

Hint given in the journal: This gem is held by a sympathetic Menaphite guard, but they've been home ill with a strange corrupting affliction.