From the RuneScape Wiki, the wiki for all things RuneScape
Jump to navigation Jump to search
For the music track, see Het's Oasis (music track).

Het's Oasis is a skilling area featuring Agility, Farming, and Hunter activities, as well as two miniquests progressing the Elder God Wars narrative. It replaced the Duel Arena, which was destroyed by an earthquake. While free players are able to visit the location, the activities within are only available to members.

The Oasis Restoration time-limited event was released along with the area, running for two weeks until 18 January 2022. 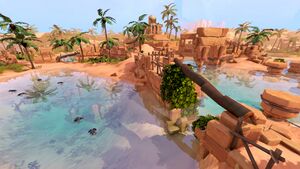 The oasis features an Agility course with level 65 Agility requirement, allowing the player to navigate the ruins of the former Duel Arena. The Agility course is cleared of rubble during the Eye of Het I miniquest, but you can clear the rubble prior to the quest. The full course gives 2,045 Agility XP when completed, and takes approximately 1 minute 45 seconds to complete. 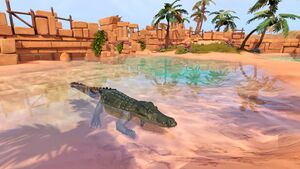 The area features a Hunter activity allowing the player to control a crocodile swimming around the oasis, and catching six types of whirligigs with different level requirements ranging from level 1 to 90 Hunter at intervals of 20 levels. The whirligigs can be customised to match the player's Hunter level by storing flowers in designated spots of the area. The hunted whirligigs will drop six types of shells with a number of uses as shown below. The lower level whirligigs have a higher catch rate and as you go up there is a chance for your crocodile to fail a catch, so it is quickest to catch plain whirligigs for the crocodile upgrades.

Prayer powders are made by grinding scarab shells. These powders are consumable items granting 30 minute boosts related to the Prayer skill, with some offering defensive and restorative bonuses.

The effect can stack up to an hour by scattering multiple powders of the same type; scattering powders that would put the timer to over an hour prompt the player with a warning and can only top the timer up to 60 minutes. All active powder effects are lost on death.

Having all six buffs active at once completes the Overpowdered achievement.

The Dundee's Crocodile Upgrades reward store can be accessed at Dundee on the north-west corner of Het's Oasis. These upgrades assist the player while hunting for scarabs. Scarabs can be obtained at a rate of approximately 1,000 per hour. Actively clicking scarabs is similar to two-tick methods; as the crocodile goes for a scarab, the player can quickly click on up to three other scarabs to catch them instantly. This method is enhanced when the stack upgrade is unlocked (increases the stack number to five scarabs).

Five scarab shells (one each of a gliding, hasty, plain, speedy, and swift whirligig shell), along with a green charm, 154 spirit shards, and a pouch, can be used to create the Holy scarab familiar. This requires level 80 Summoning.

Holy scarab reduces the rate of prayer point drain when summoned, and allows to cast the Bone Conjure special move, which adds a random bone to the player's inventory.

A Farming activity allows players to passively tend to flower bushes and harvest various flowers used to create additional types of honeycombs for the player-owned farm and Anachronia Dinosaur Farm. There are five flower types, with level requirements of 30, 50, 70 and 90 Farming, and four bushes. The bushes can be cultivated to increase their progress towards a harvestable bush.

The bushes can be fertilised while in their bare stage to increase the progress gained from cultivating. Compost, supercompost, ultracompost, the Fertile Soil spell, and the Farming master cape perk will work. Unlike other farming plots, once fertiliser has been applied to a flower bush, it cannot be upgraded into a more effective variant without first harvesting the bush.

Without fertilisers the bushes gain 0.3% progress every 0.6 seconds, giving the player minor amount of experience. Compost does not increase the base progress at all, while supercompost and ultracompost both increase it to 0.35% progress every 0.6 seconds. Applying the fertilizers doesn't yield experience. The bushes start in a bare state, reach a budding state at 30% progress, and a blooming state at 75% progress. At 100% progress they can be harvested which rewards flowers and additional experience, reverting the bush to its bare state. The player stops automatically cultivating the bush whenever it changes its state. The experience is upgraded for the tick that causes the state change, meaning that the large experience bonus is given twice: once when the bush changes into a harvestable state, and again when harvesting it.

When cultivating there is a chance for one of two random events to occur:

Compost and supercompost increase the progress gain from the above events to 2.7%, and ultracompost to 3.25%.

Honeycombs made from the oasis flowers influence the breeding chance of the animal they are fed to, or the traits its next offspring may gain.

There is a cactus patch looked after by Grouch in the south-western corner of the oasis.

In the north-eastern corner, near the iris bushes, is a pile of junk. The items required to build in this hotspot are five bronze bars, two silver bars, six buckets of sand, and a big fishing net. Once built, it becomes a water filtration system that allows players to claim various "large items" that are caught by the filter. A single item can be claimed immediately upon rebuilding.

In the south-eastern corner near the hydrangea bushes, as well as the north-western corner near the rose bushes, are two piles of flower basket rubble. The items required to build in these hotspots are five teak planks and ten steel nails. Protean planks can be used to build the baskets. These flower baskets are used to bait whirligig types other than the plain whirligig. Four baskets can be built in total. 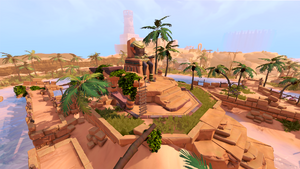 A large, broken statue of Het is located in the centre of the oasis. Each of the 4 stages of the repair process requires 50 pieces of Het to complete for a total of 200 pieces. Having luck of tier 2 or above increases the chance of acquiring pieces of Het.

Fully repairing the Statue of Het applies the Blessing of Het buff. This buff increases skilling experience gained by 10% while at Het's Oasis. No further pieces will be gained after the statue is fully repaired.

Narratively, Het's Oasis is part of the Elder God Wars storyline and follows the events of the four fronts of the Elder God Wars Dungeon in two miniquests. The cathedral in Senntisten, where the gods keep the eggs of the Elder Gods from hatching, has been under siege by the four armies summoned by the Elders for months. Meanwhile Icthlarin has been traversing the universe, looking for allies to help in the struggle, to no success. Upon his return he noticed that the gods have resorted to using necromancy to boost the defence and offered an alternative: an amulet once in the possession of another desert deity, Het, allowing its user to temporarily restore willing souls back to life. He agreed to recover it from Het's shrine, located beneath the former Duel Arena, leading to the establishment of Het's Oasis in its place. 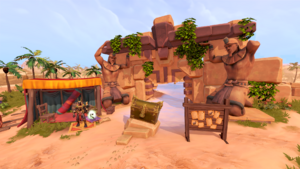 From 4 to 18 January 2022, a two-week long limited-time event takes place in the area, focusing on cleaning up the old Duel Arena and transforming it into an oasis. The event features a Community Chest, allowing players to unlock both personal and community rewards through the completion of tasks and participating in the permanent training activities. Rewards include cosmetic overrides, titles, the Chomper crocodile pet, and the Elder God Wars Dungeon drop enhancer, created from Tablet of Het fragments gained while training in the area and tradeable until activated. The enhancer will increase the chance of unique boss drops by 10% and will be removed when the event ends.

On 13 October 2021, a newspost concerning the real-world trading and game integrity was published, announcing that in the early 2022, the Duel Arena would be replaced with new content related to the Elder God Wars storyline. On 17 December, a short video teaser was published on RuneScape's website, featuring a message from Etta Stone to archaeologists regarding the dig at the Duel Arena and the discovery of the papyri possibly dating back to the First Age.[1] On 18 December, another teaser was published, speaking of the Eye, a life-giving jewel from ancient times used to bring chosen back to life and rule.[2] Another teaser, on 19 December, continued the story, revealing that the chosen succumbed to corruption, wasting their gift on cruelty and pleasure, not afraid of death anymore.[3] The final teaser revealed on 20 December, with Tumeken taking the Eye from the chosen and asking Het to bury it in a place of bloodshed as a reminder of the power and need of death, finishing the tale.[4] Each of the videos featured a papyrus themed background, gradually revealing the symbols and depictions of Tumeken and Elidinis, as well as a number of other hieroglyphs. On 21 December, the update was revealed as 'Het's Oasis', with a trailer and a newspost detailing its features and rewards.[5]