The Het's Oasis Agility Course requires level 65 Agility to access. Found in the Het's Oasis, the course traverses the ruins of the former Duel Arena. The agility course is cleared of rubble during the Eye of Het I miniquest, but this can be done before starting the miniquest. The course will take approximately 1 minute and 45 seconds to complete which yields roughly 70,000 experience per hour. 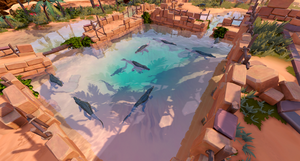 Shortcuts in the pool.

Some crocodiles may surface in the water near the course, acting as a temporary shortcut. This occurs approximately every 15 minutes, and may happen near Gayle before crossing the fallen palm tree at the start of the course in the western part of Het's Oasis, or after the rock wall jump and before the third fallen palm tree in the eastern part of Het's Oasis. Jump to first crocodile to start. The shortcuts are visible to all players, and disappear after a short time. It is possible for the shortcut route to disappear while the player is jumping, forcing them back to the start. Jumping across crocodiles for the first time completes the Unlicensed Chiropractor achievement.

The appearance of a shortcut is announced to nearby players with the following chat message: Some crocodiles have resurfaced in the [eastern/western] pool of Het's Oasis. If the shortcut disappears while a player is using it, the following message is displayed when transporting the player back to the start of the shortcut: The route disappears before you can complete it, forcing you back to the start.

You can fail any of the obstacles on this course. You will still traverse the obstacle, but get a message you have failed it and not gain the full XP for that obstacle. A tally is kept of how many obstacles you have failed in one cycle of the course. The final experience you earn after jumping down the last large rock is reduced by 1% (10.6 XP) per obstacle failed.

The following items have a chance to be obtained at each of the course's obstacles.

This information has been compiled as part of the update history project. Some updates may not be included - see here for how to help out!
Retrieved from ‘https://runescape.wiki/w/Het%27s_Oasis_Agility_Course?oldid=35982817’
Categories:
Hidden categories: