From the RuneScape Wiki, the wiki for all things RuneScape
Jump to: navigation, search
This article is about the quest variant. For the combined variant encountered in the Dominion Tower, see Apep and Heru. 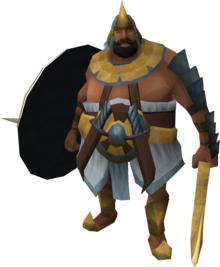 Heru is one of Lady Keli's henchmen and helps kidnap Prince Ali. He is short and fat, but nevertheless strong, although seeming quite dim. He escaped on the boat along with Lady Keli and Apep after being confronted by Ozan, Leela and an adventurer. He is later seen alongside Lady Keli again during Diamond in the Rough and is tasked to battle the three same people after Keli reveals herself to be Amascut the Devourer. He is level 5 and does not attack initially, until Apep is defeated. Sometimes, he will position his shield towards you. Turn your camera away, otherwise you will be blinded and unable to do anything for a moment. As soon as Apep dies, Heru will attack normally. When defeated, he falls down and disappears into the sand.

During the fight, he cannot be hurt for over 50 health at once.

After Diamond in the Rough, players can obtain Heru's shield, Aten, by slicing Dung kalphites in the Kalphite nursery.

Heru is fight-able as a class X1 boss monster in the Dominion Tower minigame alongside Apep if the player has completed the quest Diamond in the Rough. 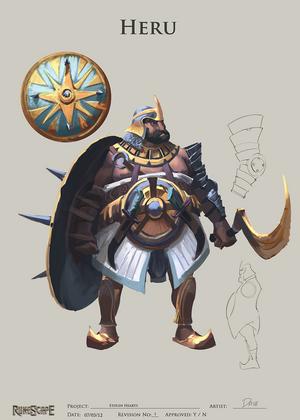