Hit Calculator is a JavaScript extension that adds a hit calculator to the bottom of monster infoboxes. It can be activated/deactivated in the "Gadgets" tab of Special:Preferences, in the "Tools" section. The calculator also now has a stand-alone version at Calculator:Combat/Hit calculator which works eeven if the infobox version is disabled. Note: All images on this page taken in light mode, appearance in dark mode may vary slightly

To start using the hit calculator just enter your RuneScape name in the field provided, optionally choose a preset and hit submit. Note that in order for RuneScape levels to load the runemetrics profile must be public. If you do not wish to enter your RuneScape name, levels (and the darklight boost) can be entered manually using the "Manually enter levels" toggle. You can also choose whether to treat slayer monsters as being on task or not.

If the creature has multiple versions the calculator will automatically update when you change the version in the infobox. It will also submit when you enter a player name or choose a preset.

All settings and presets are saved in local storage, which means they are unique to the browser they are not saved based on username.

Escape can also be used to exit out of both menus (this is the equivalent of cancel).

If the preset contains a weapon with a special attack that provides a buff/debuff these calculations assume the special attack was used and was successful. Additionally the maximum buff and/or debuff from any potions or prayers is assumed, however a creatures immunity to stat drain is considered. For information on preset contents see the preset menu section below. While the presets do not verify that the player has the necessary level, spell damage will be appropriately calculated as it is limited by weapon tier, spell and player level. If the genocidal perk is active the calculator assumes the maximum extra damage (7%). If auto loading player data it is assumed that if the player has completed Dimension of Disaster that they have unlocked the Darklight upgrades from the reward shop. For prayers and abilities there is no validation to check that the prayers/abilities can be activated simultaneously (eg. 2 overhead prayers or 2 abilities that share a cool-down). For weapon switching there is no limit to the number of switches used and no validation that it is possible for all the specs to be active at a time, it is also assumed that all special attacks were successful with the maximum buffs. 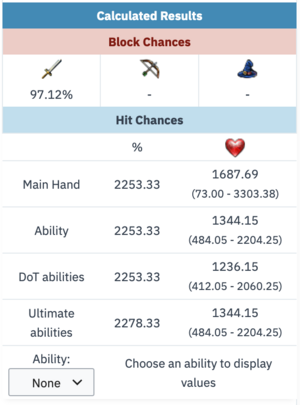 Results display on the hit calculator

The results displayed is split into 2 sections "Block Chances" and "Hit Chances". If the preset contains a weapon with a special attack that provides a buff/debuff these calculations assume the special attack was used and was successful. Additionally the maximum buff and/or debuff from any potions or prayers is assumed, however a creatures immunity to stat drain is considered. Similarly if creature is a slayer creature, it is assumed that the player is on task (for things such as Slayer helmet).

Displays your chance of blocking the monsters attack against you, for each of it's attack types. This does not show block chances for special attacks and abilities. All values shown are uncapped percentages, therefore they can be greater than 100% or less than 0%. Percentages greater than 100% means the creature will not hit you, percentages less than 0 mean that the creature will land every hit on you.

Chances are displayed in percent and are not limited to 0-100, therefore a number greater than 100 is the same as 100% hit chance while a number less than 0 means that you will not be able to hit this monster. The second number in parentheses (with a tooltip), if present, displays the hit chance if the debuff from Quake is active.

The damage is broken up by type with only relevant ones displayed. The possible damage and hit chances to show are: main hand, off hand, ability, damage over time, defensive ability, and ultimate ability. Main and off hand damages are the auto attack damages of your main and off and weapons. Ability damages are only displayed if applicable and the defensive line is only displayed if it differs from regular abilities. All damages display the average damage followed my the damage range (minimum damage - maximum damage), and for ability damages the damage range assumes ability damage is the standard 20-100%. Note that the maximum damage over time damage is equal to the base ability damage) 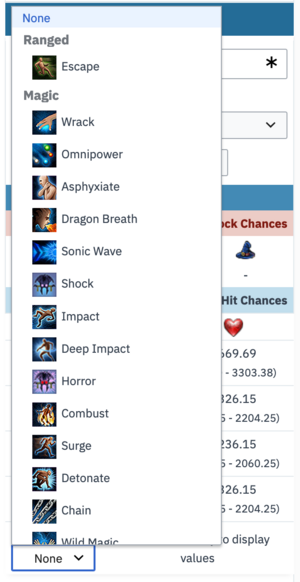 The ability damage selector in the results (infobox version)

The last line, assuming ability damage applies, contains a drop down which lets you choose an ability and then calculates the damage for that ability. Again damage displayed is average damage followed by the range. Generally the first set of values is the total damage done by the ability, this may be followed by a secondary damage (in italics) which has a tool tip explaining what it represents. Among others, secondary damage can be: damage done to nearby targets, damage done to the player, damage per hit, or additional damage dealt over time. The dropdown is also filtered based on the weapons and player levels. The Weapon Special Attack calculates based on the main-hand weapon selected, for special attacks that deal no direct damage (for example those that summon a mirrorback spider) the damage amount is not given. While only abilities that can be used with the presets weapons are shown, there is no validation to check that the ability can be used while an ability in the preset is active (for example if they share a cooldown). 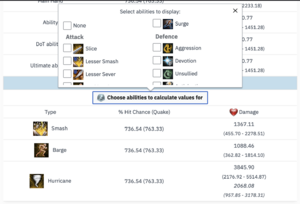 The ability damage selector in the results (stand-alone version)

For the stand-alone hit calculator multiple abilities can be displayed at once, and they will persist when equipment or the monster/version is changed (but not on page refresh). 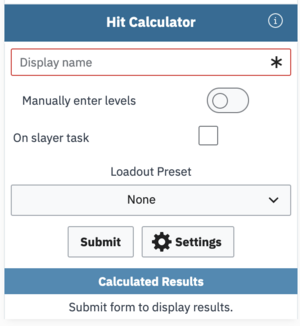 The base hit calculator form 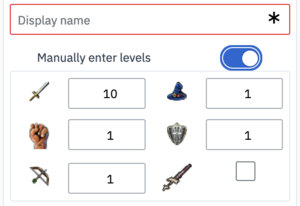 The manual entry form for levels

The basic form in the infobox has a field to enter your runescape name (saved and synced with those on quest requirement and similar forms), a dropdown for choosing the preset to use, the submit button and a settings button. The presets in the dropdown are displayed in the order they are arranged in the settings menu (see below for more info). There is also a toggle to enable manual entry of combat levels (and the darklight boost purchased from the Dimension of Disaster reward shop) if you are unable to load your levels. 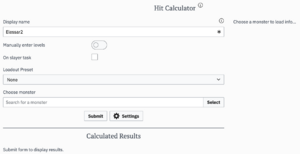 The basic form for the stand-alone calculator has many of the same fields as the infobox version: runescape name (saved and synced with those on quest requirement and similar forms), a toggle to enable manual entry of combat levels, a dropdown for choosing the preset to use, the submit button and a settings button. It also has a field to select the monster name (functions similar to a search field with suggestions based on the typed text) and depending on the monster chosen also has a select to choose the monster version. 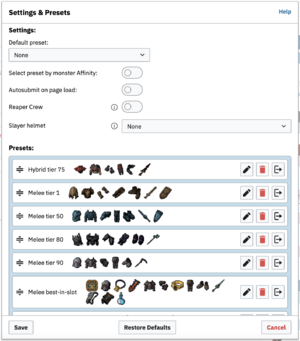 Appearance of the settings menu

The first dropdown lets you choose a default preset, this preset is set as active in the infobox when a page is loaded. The toggle below will allow you to choose a preset per affinity. If this is toggled 3 new dropdowns appear allowing the choice of preset per affinity. When this feature is toggled the active preset is chosen based on the monsters highest affinity, this will change when an infobox is changed to another version (this is based on the melee, ranged and magic affinities not the weakness).

There is also a toggle to autosubmit the form on page load.

The next toggle ("Reaper Crew") Allows you to choose whether or not you have completed the Reaper Crew, unlocking the [Name] the Reaper title. The achievement permanently applies several buffs to the player.

The final option is a select with allows you to choose which, if any, slayer helmet you have placed on the Anachronia Slayer helmet stand.

Following the default list is a list of all the created presets. On the far left of each preset is a drag area which allows you too rearrange presets, the order in which the presets appear here is also the order they appear in the dropdown menu in the infobox/page select. The name of each preset is followed by thumbnails of all the equipment, familiars, prayers, potions, spells, perks etc that are selected in that preset, each also has a tooltip with its name. On the far right are edit, delete and export buttons allowing each preset to be changed, deleted or exported respectively. At the end of the presets list are buttons to add a new preset, duplicate a preset, import a preset or clear all presets. Tip:The duplicate preset button is useful if you want to create several similar presets, you can create one to use as a template of sorts and then duplicate it as necessary. Tip:The import/export buttons make it easy to share presets with friends or when reporting errors.

In the footer of the settings menu are the buttons to save changes, cancel or restore all defaults. Restoring defaults resets all presets to the defaults as well as all other settings, this cannot be undone! 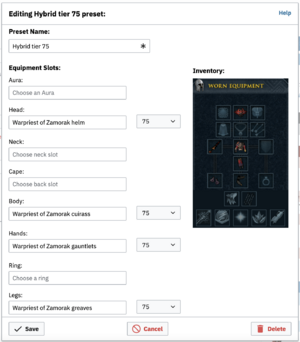 Appearance of the preset menu

Thie menu allows you to change the contents of a preset, or create a new one. At the top of the menu is a field which contains the name of the preset (how it will appear in the presets lists). The left half of the menu contains the various fields to add equipment etc while the right contains an inventory overview. In the footer of the menu are the save, cancel and delete buttons.

Each inventory slot has a corresponding field where an appropriate item can be chosen (only items that fit in that slot can be chosen). Due to the way in which the fields filter items most of an item name may need to be typed before the choice appears. The off-hand weapon slot is automatically disabled if a two handed weapon is chosen in the main hand slot. Similarly the fields to choose combat spells (main and off-hand) are only displayed if a magic weapon is selected in the corresponding slot. If a Tirannwn quiver is chosen in the ammunition slot a secondary field will be displayed to choose its contents. Note that the ammunition slots and calculator don't verify that the ammunition used matches the weapon selected (as long as a ranged weapon is selected).

Note that none of the fields verify that the player has the necessary level to use the equipment, spell etc. 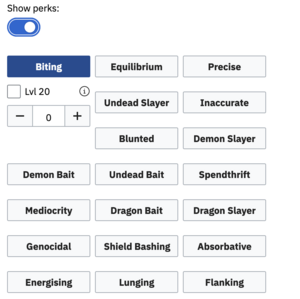 At the end of the equipment fields, following the potions field is a toggle to enable perks. Toggling this will reveal a list of combat relevant perks, clicking on an individual perk will activate it and allow the choice of rank and whether or not it is on tier 20 equipment. Perks do not need to be assigned to the piece of equipment they're on.

The right side of the menu displays an overview of the selected items etc. Clicking on an item or slot in the inventory overview will jump down to the corresponding field. Note that this panel has its own scroll bar if you are on a short screen.

If you discover any errors, actual errors or calculations that are incorrect please report them on the discussion page. Any suggestions or improvements are also welcome there.