From the RuneScape Wiki, the wiki for all things RuneScape
< Hellhound
Jump to: navigation, search

Hellhounds have a low defence for their levels, but make up for this with a high strength level. The level 92 and 95 hellhounds have maximum hits of 224 and 272, respectively. All hellhounds are weak to slash attacks, except for the hellhounds in the God Wars Dungeon, which are weak to water spells. 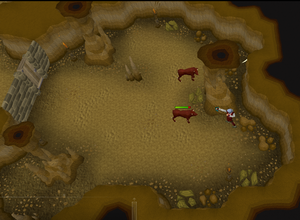 The two hellhounds in the Witchaven Dungeon can be easily safespotted once they become unaggressive; the gold rock near the east column, and the spot as shown in the image can be used as safespots to attack the hellhounds.

If you wish to fight the hellhounds in the Wilderness, remember to hop worlds to check for other occupants in the area. If you are attacked by another player, quickly run to a safe zone and teleport out using an emergency teleport; if you are stunned, you must first use Freedom (

One popular method when fighting hellhounds is to equip Guthan's set, the vampyrism aura, a demon horn necklace, a healing familiar such as bunyips or unicorn stallions, and making use of a bonecrusher. This allows players to sustain their prayer points, with the added benefit of providing an efficient healing method; it is very easy to kill hellhounds using this method, without paying much attention at all. At high levels, it is possible to amass up to 180,000 experience/hour.

One of the best ways to AFK train at the hell hounds is to equip a split dragontooth necklace with the bone crusher and using a 2h weapon plus having revolution activated with as many area damaging abilities like Cleave, Hurricane, Quake, Meteor Strike, and some abilities that gives adrenaline, for the area effect abilities. If you have a Prayer level of 92 or higher the Soul Split curse makes this method completely afkable, otherwise vampyrism aura or scrimshaw of vampyrism, and protect/deflect melee prayer on will suffice. Also always have a little high healing food incase you forget to activate a prayer, also you could bring a charming imp for charm drops.

For free players, the only available hellhounds reside in the Wilderness. Only bring items you are prepared to lose. As such, equipping a set of rune equipment and bringing a full inventory of food may be the safest course of action. Using a gravite 2h sword can make it easier to kill hellhounds, but makes you susceptible to damage because of the absence of a shield.

For higher levelled players (70+ Attack, Strength, and Defence), hellhounds can net from 117,000 experience/hour (325 kills/hour) to 200,000 (550 kills / hour) at maxed combat. To maximise this experience, take a sip of any available potions - attack, strength or defence - and be sure to constantly monitor the boosted levels.

One advanced strategy is to use the Twisted bird skull necklace to keep multiple prayers activated, such as Protect from Melee and Ultimate Strength. While wearing this necklace, each pile of bones buried yields 50 prayer points. To speed up the process of burying bones activate Area loot and and bury bones using the Action bar. Rune God armour gives a prayer bonus which may help with this strategy. A legendary pet using the Scavenge ability makes gathering bones personally almost unnecessary.

Use of the Revolution combat mode is strongly recommended while fighting hellhounds. Members may utilise any one of the action bars as shown here.

Some considerations to make while fighting hellhounds include: