From the RuneScape Wiki, the wiki for all things RuneScape
Jump to navigation Jump to search
This article is about the minigame. For the music track, see The Heist.

The official world for Heist is world 91 (P2P).

Heist is a members-only minigame which involves two opposing teams (2-5 players on each team). Robbers try to secure loot undetected while guards attempt to uncover and arrest the robbers before time runs out. The game ends if all of the robbers have been converted to guards or if the robbers have collected sufficient loot. Another occasion, but rarer, is when the time runs out, and the robbers and guards have a tie game. The minigame rewards Hunter and Thieving bonus experience as well as perks which may be used within the minigame itself.

The minigame may be accessed by climbing up a ladder just north-west of Falador, by the Taverley wall. It has several blue and red banners around it. Falador Teleport or the hot air balloon to Taverley are quick ways of getting close. 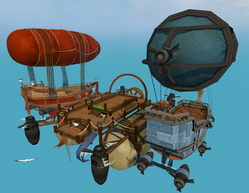 The two airships and the lobby.

The waiting room is a platform supported by a number of prop engines and two ships with balloons. Players must dismiss any active followers before entering as they are not permitted in the waiting area. No items may be taken into the game, so players must deposit all carried items to enter a game - a bank chest is available for this purpose. The waiting area consists of three sections, one of which must be entered to join a game. Players may choose to begin the game on the side of the robbers, guards, or "neutral". Neutral players will be assigned to the team with fewer players before a game begins, or they will be randomly assigned to one of the two teams if the number of players are the same. After a sufficient number of players on both sides are ready (2 players minimum and 5 players maximum on each side), players are given the option to select one of two locations for 10 seconds. Once you have voted, your selection cannot be changed. The location with the higher number of votes is selected. If both locations receive an equal number of votes, the map is selected at random.

Sir Vyvin and Liara are present on behalf of the guards and robbers respectively. Speaking to either of them provides options to learn about the minigame, convert reward points, and play a tutorial game.

You automatically join the Public instance at the end of each game. If you wish to re-join a Private one, you must climb back down the ladder and re-join it.

A robber has been arrested. 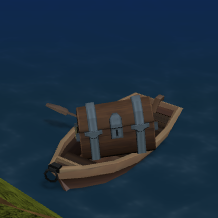 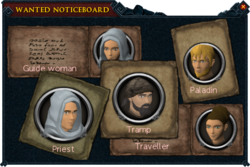 Players are split into two opposing teams: guards and robbers. The robbers' role is to steal loot from around the town and deposit it in one of the receptacles. To avoid capture by guards (all appearing as male regardless of their players' genders), they can disguise themselves and change form into the town's inhabitants, and then attempting to match their behaviour by doing the activities they perform, such as sitting down on benches and wandering around randomly. On some maps, robbers can also hide in carts of hay, but guards can search the carts to find them. If a guard finds a robber hiding in a cart of hay, then the robber will be kicked out of the cart and instantly accused, stunned and bound for 3 seconds, and lose all of their run energy. The guards' role is to stop the robbers by trying to find the disguised robber, accuse them, and then arrest them.

The robbers will need to deposit two loot for each robber in the game (Ex: A game with 3 robbers would require the robbers to collect a total of 6 loot to win). Robbers can find loot dispersed throughout the village, though mainly in the bank. Each chest may only be looted once, after which it closes. Chests outside of the bank can also be locked by guards for 30 seconds, which, in return, can be lock-picked by robbers. The loot can be deposited with the leader of the robbers, Liara, who is on the robbers' ship (the starting location) or with the deposit boxes located around the perimeter of the town. A robber cannot steal or receive loot if the robber is not in disguise.

A guard can accuse a character of being a robber, and if correct, go in for the arrest by clicking the character again. When accused, the robber will put their hands up for 30 seconds, lose 80-95% run energy, and wouldn't be able to transform into a new disguise during the time. Once the robber is caught for the first time, the robber would be handcuffed for 30 seconds before breaking free. After the robber is caught the second time, the robber will be sent to jail for one minute, and if the robber doesn't manage to escape in time, the robber will become a guard and join the guard's side. The imprisoned robber can only escape if another robber opens the cell door to free the robber, the robber uses a jail key to unlock the cell door (mainly obtained by pick-pocketing a key off a guard who has been jailed for incorrectly accusing too many NPCs), or the robber uses a spade under the bed to dig their way out. The spade perk can be bought with reward points, while the jail key can be pick-pocketed from a guard (though the player is not guaranteed to receive a key when pick-pocketing, and the key can only be received and used once). If a robber joins the guard's side, the robber will only be able to use the Undercover Cop perk.

To prevent wrongful accusations, the guard has 3 seconds to switch to a new citizen to accuse, and this can be done many times as long as 3 seconds haven't passed after the new accusation. If a guard accuses an innocent civilian three times, then the guard will be sent to jail by Internal Affairs, in which after 30 seconds, the guard is freed. Another guard can open the cell door to free a guard before that time, but a guard can only do this once. A good method is to use the noticeboard, which is unlocked through reward points, to see the characters that the robbers have taken the form of. The incorrect arrest counter is not reset by a correct arrest, only by being jailed.

The game is finished when the robbers have turned in enough loot, or if the guards have captured all of the robbers. If the game last the full 20 minutes, the guards will win. A player may leave the game by right clicking the viewing station in the guard's station or Liara on the robber's ship, but the player will not earn any reward or win points.

An example of a map select screen

A player correctly accuses another player, and arrests him.

Maps are modeled after cities in Gielinor. Two are chosen randomly before the match from the following list, and participating players can vote between the two choices. Each map has features that are unique to it.

The desert town of Al Kharid is available, and its features include:

The town of Burthorpe is unique in that it comes in two variations: Day and Night. There are not many differences between the two, besides the atmosphere.

The Werewolf town of Canifis is an available option and was voted for in a January Power to the Players poll. It has a number of unique features, which include:

The vampyre city of Darkmeyer is one of the available options regardless whether the players have completed The Branches of Darkmeyer quest or not, and it is fairly unique in the fact that the White Knights are not involved. Its features include:

If the random event requests an item, the item can be obtained before talking to them. All random events are already present when a game starts, and can't occur more than once. 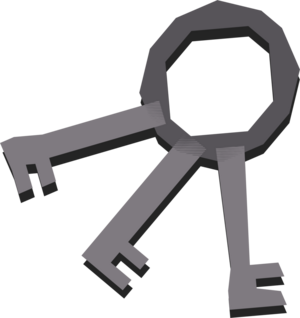 The house keys as they appear on the ground.

On all maps, an Upset woman can be found who has lost her House keys. The keys are randomly placed somewhere around the map (this does not show on the minimap), and must then be picked up and be given back to the woman for a reward. Robbers can pickpocket the keys from guards. This is the most common random event.

On all maps, a Shady stranger can be found, who wants a wanted poster torn down because it is impeding his ability to thieve. The poster is a banner with a picture of a bot, and can be found anywhere on the map. However, it does not show on the minimap.

On all maps, a boy has lost his ball, which must be retrieved and given to him for a reward. The ball does not show on the minimap. Robbers can pickpocket the ball from guards.

On all maps, an Injured man can be found, and he must be led to a medical supplies crate in order to take a first aid kit and heal him. The man follows the player at a very slow pace, and other players can intercept him by talking to him.

A shocked woman has lost her beloved kitten, Captain Meow. Players must find the cat and lead it back to the woman for their reward. The kitten does not show on the minimap, while the shocked woman does. This random event is the most uncommon.

Exclusive to the Burthorpe (Night) and Canifis maps are infected, which will be Zombies for Burthorpe and Werewolves for Canifis.

Every so often an infected will appear. Robbers can then disguise themselves as one, becoming infected. Once infected, any citizen that the robber turns into will become one of the infected too. This means that, eventually, all citizens could potentially look the same, allowing the robber to blend in better.

When at least one infect has spawned, guards can take up to 5 Vaccines from the equipment chest in the guard station. Vaccines can be thrown at a 5x5 square area around the player to cure any infected citizens to their regular form. When used, infected around the guard will be stunned for a moment and returned to their original forms, while robbers will be given a random one. Citizens will say cough when they have been hit with the vaccine, but robbers will not. If the original infected is hit with the vaccine, it will disappear.

Your team has won!

The reward points can be used to buy certain "perks" such as the usage of the notice board and a deployable mine for guards or the use of a decoy and a spade for escape for robbers. Additionally, points may be redeemed for bonus experience in either Hunter or Thieving. The rewards interface is split between Hunter for guards and Thieving for robbers, but points earned by participating on either side may be used to buy any of the rewards.

Each role may be levelled up by spending 250 points, resetting all bought perks. There is no advantage to levelling up, but it acts as a prestige system so that points may be accumulated to purchase perks again. You don't need to buy all the perks of a role, or any at all, to be able to prestige.

Players may hold up to 500 rewards points and 100 win points at once before needing to spend some in order to earn any more. 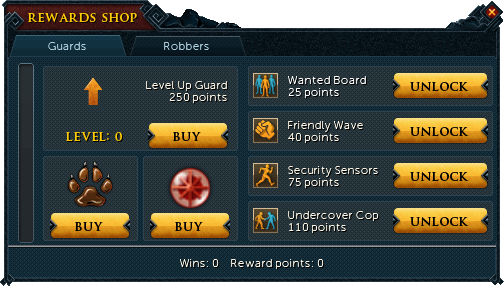 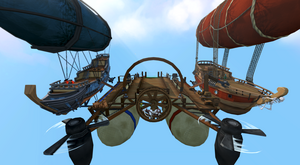