From the RuneScape Wiki, the wiki for all things RuneScape
Jump to navigation Jump to search
For the achievement, see Heartstealer (achievement).
Not to be confused with Stolen Hearts.

Talk to Caelyn Kadaan or Annette Kadaan on the 1st floor[UK]2nd floor[US] of the house north of Edgeville Bank. Annette will tell you that Caelyn isn't having fun thieving anymore due to only committing petty theft acts, suggesting that a more complex heist will lift her spirits. Annette will then teleport away to sell a gold lawn gnome previously stolen from Duke Horacio.

After Annette leaves, Caelyn will tell you about an upcoming gala hosted by the Varrock Museum to celebrate the donation of a heart-shaped ruby. She requests your help to steal the ruby. After accepting, she will have three tasks to complete in preparation for the heist. These tasks can be completed in any order.

Caelyn will hand you some coins (not visible in your money pouch or inventory) to purchase a disguise from Thessalia's Fine Clothes in Varrock. Head to the clothing store and talk to Thessalia to buy some masquerade masks to use as disguises, then head back to Caelyn to complete the task.

Caelyn will instruct you to steal the gala plans from Curator Haig Halen and make a copy of the plans. She will give you some "specialist tools" (paper and crayons) to help copy the plans. Head to Varrock Museum and pickpocket the curator to receive some crudely drawn gala plans. The curator will catch you in the act; you can either lie or rat Caelyn out. Go back to Caelyn to give her the plans and complete the task. 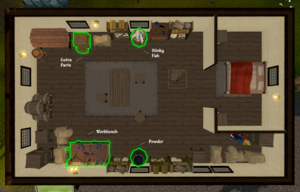 The layout of the room for the smoke bombs instance.

In a short cutscene, Caelyn will teach you how to finish making her smoke bombs. To make the bombs, Caelyn will shout out a series of 10 instructions, one at a time. Each instruction requires you to interact with one of four objects, including a workbench, parts box, fish barrel, and gunpowder barrel. If you take too long to complete an instruction, the bomb will explode and you'll have to start over. If you fail to make a bomb, you can ask Caelyn to make the process easier by increasing the time limit and pointing at the correct object to interact with.

After following 10 instructions, the bombs will be finished, completing the task.

Caelyn will tell you that the preparations are complete, and then teleport to the outside of Varrock Museum. Talk to Caelyn at the museum, and she will give you the Scarlet Thief's mask. Equip the mask and talk to her again, then say you're ready to enter.

When inside, another masked woman will come talk to you, seeing that you are a thief but not exposing you to the others. Pick any dialogue option to say to Caelyn to continue.

Try to walk downstairs. You will be stopped by the museum guards and told the downstairs is off-limits.

Walk upstairs and talk to the drunken dwarf, and he will ask for 4 drink tokens:

Talk to the drunken dwarf and tell him to start drawing attention. The drunken dwarf will cause a commotion and attract all attendees upstairs, allowing you to enter the museum basement. 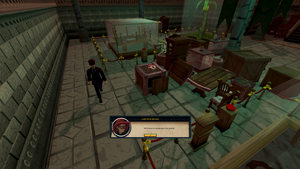 Another cutscene will appear, showing that you need to disable three power points while avoiding the guards. There is one lever each in the north, east, and west rooms. To find each power point, follow the wires on the ground leading to a lever that you can pull to progress. Getting caught doesn't reset any levers you've already pulled, so try as many times as needed. The guards' sight range is a frontal cone that can be blocked by obstacles, and you can also hide in crates along the way to avoid being seen.

After pulling all three levers, walk up to the glass and try to open it. Caelyn will cut a hole in the glass. Take the ruby, and a cutscene will play where Caelyn discovers that the ruby is a fake. The masked woman will find you and reveal herself as Annette, who confesses that she created and donated the fake ruby as a lure to get Caelyn to attempt a high-stakes heist and regain her passion for thieving. The curator and some museum guards will then find you, prompting Caelyn, Annette, and you to teleport away.

You will appear back in the Edgeville storehouse where the quest began. Annette will reveal that she received a large number of Chronotes from the museum in exchange for the fake ruby, and the two thieves will begin plotting to purchase and resell the Archaeology Guild's stock of tea. They will thank you for your assistance in the museum heist. 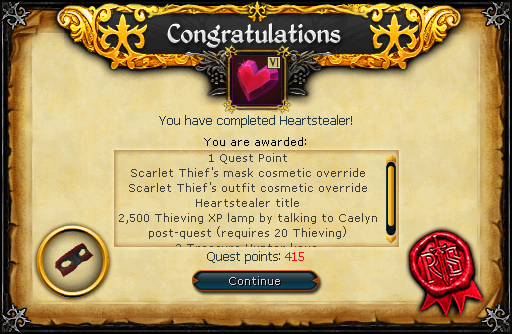