The heartfreezer amulet is an amulet that could originally be won from Treasure Hunter during the Heartfreezer promotion between 11 and 14 April 2014, and returned as an uncommon prize from 14 July 2014 onwards. It is also a possible reward from shiny and sparkling clover necklaces. Wearing it changes it to Heartfreezer amulet (active) and makes it unstackable. It has 100 charges.

There is a chance to receive 25 Heart of ice tokens from combat drops or skilling while the amulet is equipped. After receiving the tokens, the amulet will lose 25 charges and a message will be displayed which reads: Your heartfreezer amulet feels colder for a moment, and you collect 25 Heart of Ice tokens.

Once the amulet runs out of charges, it becomes Heartfreezer amulet (empty) and can be destroyed for 5 more Hearts of Ice. Doing so will give the message: You gain 5 Hearts of Ice as you destroy the amulet. A purely cosmetic version of the Heartfreezer amulet can be retrieved from Diango in Draynor Village after all the charges have been used up and/or it is destroyed.

If it activates while you have a full inventory, it'll show the message: "Your heartfreezer amulet feels colder for a moment, but you don't have the space for any Hearts of Ice tokens in your inventory." and will retain its charge. 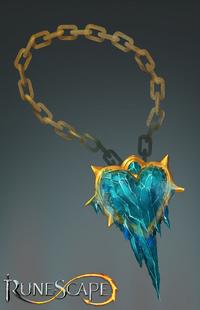 Concept art of the heartfreezer amulet
This is an auto-generated list (update now). For all sources of this item, see here (include RDT). For help, see the FAQ.

This information has been compiled as part of the update history project. Some updates may not be included - see here for how to help out!
Retrieved from ‘https://runescape.wiki/w/Heartfreezer_amulet?oldid=35470601’
Categories:
Hidden categories: