Head of the Family (miniquest)

Head of the Family (miniquest) is a part of the Tales of the Arc miniquest series.

Talk to the Waiko moai on the hill to the north of the Khan's house on Waiko which can be found in the north-eastern part of the island. Then travel to the island of Aminishi and head north, along the western beach, then up the stairs to find the Aminishi moai. She tells you that you will need to find a captain with a cargo freighter ship, a crew, and some way to prevent her from dying while on the ship.

Return to Waiko, and speak to Yuehanxun the Dealer, found in the south-east village section of Waiko, just south-east of the bamboo stalks, about a crew. She requires a payment of 15 fish oil for her two cyclops labourers. After payment, the labourers will be waiting near Aminishi's moai on Aminishi.

Talk to Rosie (supplies) at the Waiko market about the plight of the moai. She tells you to inquire with Sea Witch Kaula on Whale's Maw, as there is a legend regarding the transport of moai statues. Visit her on the north-west part of Whale's Maw. After hearing a sad tale about the Whale's Maw's moai statue, you ascertain that transportation is possible, as long as the moai keeps contact with its respective soil. Return to Rosie on Waiko, who asks for 5 bamboo, 150 chimes and asks you to fill up a bag with Aminishi soil. From this she will make a basket filled with Aminishi soil, in which to keep the moai statue in during transport. Go to Aminishi and fill the bag (the dock works). Return to Rosie on Waiko and give her the bag, 150 chimes and 5 bamboo. Rosie will handle the delivery of the goods. At this point, before leaving Waiko, you may wish to use the bank chest there to prepare for a fight scaled to your combat level in the next step.

With a crew and transport method secured, you will lastly need a captain and ship. Cap'n Ekahi can be recruited on the beach of Aminishi, east of the docks. He requires a payment of 300 chimes for the service. 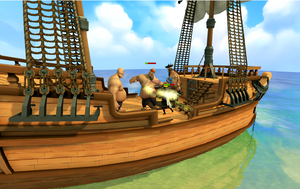 Go talk to the Aminishi moai statue to start the transport, then talk to Cap'n Ekahi who tells you to travel using the rowboat on the shore next to him. If you haven't already, prepare for a fight scaled to your combat level. After departing with the moai statue, Capt'n Ekahi and his cyclops crew betrays the player and tries to kill them. This combat situation has an unsafe death, but is scaled to your combat level and comes with a warning beforehand. It can be safespotted though, by stepping behind the mast.

After defeating the cyclopes, you end up at your ship on Waiko with the 300 Chimes fee refunded. Return to the hill where you started the quest to see the Aminishi moai statue being placed in front of the Waiko moai statue. Talk to the Waiko moai to finish the miniquest. 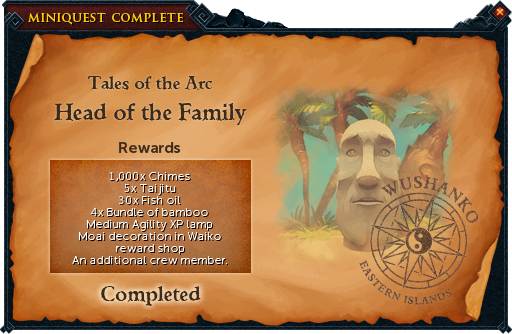 Head of the Family (miniquest) is directly required for the following quests/miniquests: