From the RuneScape Wiki, the wiki for all things RuneScape
Jump to: navigation, search
The Old School RuneScape Wiki also has an article on: osrsw:Haunted Woods 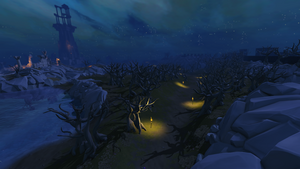 The gloomy extended part of the woods, east of Darkmeyer and adjacent to the Eastern Sea, still uses the old graphics of the woods, before August 2011.

The Haunted Woods consist of a large, mostly dead and swampy vampyre-infested forest which covers a large portion of Morytania. It is located east of Canifis and requires the Priest in Peril quest to be completed before it becomes accessible. It is the home of leeches, vampyres and hollow trees. There is a grave in the woods that must be found as a part of the Creature of Fenkenstrain quest. There is a fairy ring (code ALQ) south of the Port Phasmatys farming patch for quick access to Zanaris.

Just south of the Haunted Woods is the entrance to the Werewolf Agility Arena. You'll need the ring of charos to enter.

Players often come here for an emote Treasure Trail clue, requiring them to do a 'Panic' emote without anything equipped, while standing at the heart of the haunted woods just southeast of the fairy ring.

The Haunted Woods is a long-dead forest, the remnants of a once beautiful and tranquil forest that spread across Morytania, from the Mort Myre Swamp to Port Phasmatys. However, when the vampyres arrived, the whole land began to decay and rot. While part of the same forest, the trees in the south rotted and festered, becoming the Swamp, whereas those in the east merely died. It may have something to do with the kind of soil in the region, though it is still unclear.

One of the foremost dangers in the Woods is the threat of vampyres. Level 88 vampyres prowl around the woods looking for travellers to feast on, and may also hide in trees and leap down to surprise unwary adventurers. Like all of Morytania, the Haunted Woods are highly dangerous, and one should not attempt to traverse them without being properly prepared.

Ten torches are scattered around the Haunted Woods which can be lit using the Firemaking skill to restore a total of 100 Prayer points. Jagex states that this is useful if you are being "swamped" by vampyres.[source needed]