Haunted Mine is a quest where the player ventures into the depths of a maze-like mine located south of Mort Myre swamp.

Recent forays into Morytania by some of Saradomin's more fanatical supporters have unearthed murky rumours concerning an abandoned mine in the south.

Legend speaks of an unusual material, hidden in the depths of the mines, that is somehow linked to the desolation and fear that now surrounds the place. Do you have the nerve to find out more, and enter the haunted mines of Morytania? 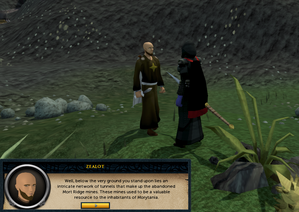 Speaking to the Zealot outside the mine.

Walk up to the Saradominist zealot outside the Abandoned Mine, located on the south-western edge of Morytania and just west of Burgh de Rott, and tell him that you're a follower of Saradomin or Guthix or no particular allegiance. He tells you about a quest that has been entrusted to him by Saradomin himself to reopen the abandoned Mort Ridge mines and recover the valuable resources that have been lost to the world.

The zealot believes that Saradomin himself blessed the River Salve, whose waters connected and percolated through the rocks to reach the deeper levels of the mines. When strange crystals began to form in the mines, its inhabitants used them to create a legendary artefact that protected them from Morytania's evil beings – the Salve amulet.

The Ridge mines were previously guarded by Zamorak's mage, Treus Dayth, who eventually failed and was defeated after a Saradominist incursion. Enraged, Lord Drakan, another Zamorakian, killed the raiders and sealed the mine, before condemning Dayth's soul to be bound to it for eternity and to protect it from any Saradominists who tried to access the crystals thereafter.

The zealot also mentions that he has a key that grants him access into the mines, but he cannot trust anyone else with it. Simply pickpocket him to obtain the key.

Walk a bit south to the cart track and climb over the first cart, walking past the second to reach the mine's entrance. Use the zealot's key to unlock the doors and enter the mine.

If you die or exit the cave at any point, you must obtain another key from the zealot. 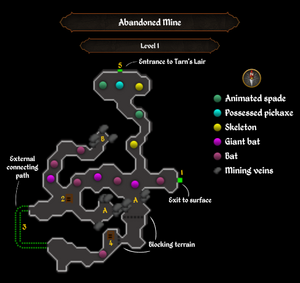 Level 1 of the Abandoned Mine

You'll arrive at the entrance to the first level (1), which has two ladders that lead deeper into the mines. The first ladder (2) is of no interest for this quest, but the path to the second ladder (4) is blocked by obstructions. (NOTE: If you want to complete the medium Morytania task Poterheist, go down ladder 2, go east, then through the two doors going west, and mine some mithril immediately to the right after second door)

Go west past the first ladder and exit the cave out of the mine. On the surface, follow the road (3) marked by a visible track and re-enter the mine. Once inside, head east and go down ladder 4. 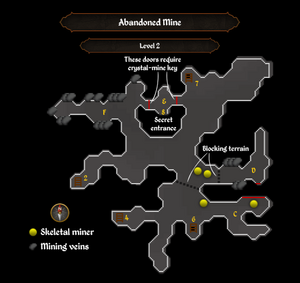 Level 2 of the Abandoned Mine

You'll find yourself at the south-western ladder (4). Simply walk east and head down the nearby ladder (6). 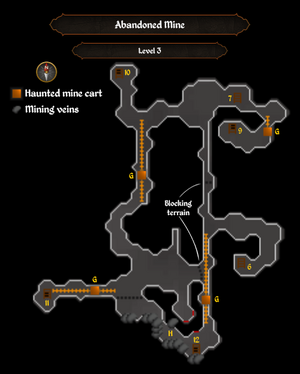 Level 3 of the Abandoned Mine

From the eastern-most ladder (6), head west and south along the tracks, while being wary of the haunted cart (G). If the cart hits you, you'll be damaged and pushed back to the beginning of the cart's path.

Naturally, you can use the alcoves beside the tracks as safe spots to avoid the cart. Once across, head down the ladder (12) to level 4. 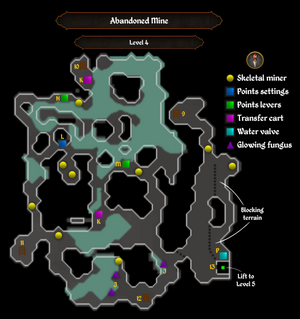 Level 4 of the Abandoned Mine

Level 4 of the mine has several key elements, which are marked on the map as:

To access the deepest and darkest levels of the mine, you need to use the glowing fungus found on this level as a light source. Unfortunately, the path to reach the lowest level involves going back up to the surface, and daylight exposure causes the fungi to crumble to ashes instantly.

Your only option is to use a complicated system of operational carts to transport the fungi to the other side of the blockades found on level 3.

Pick up a few glowing fungus (J) and place one in the southernmost cart (K).

You must now make use of the track map (L) to operate the cart system and move the fungus to the desired spot, marked by ladders on the top-right of the map. The path taken by the cart is determined by the position of levers, marked on the track map by letters A through K. You can achieve the final configuration by starting from the ladder, or referring to the images in the gallery.

There are 3 sets of answers for pulling the right levers. Once you have loaded the fungus and set the right path, press 'Start' on the track map.

If you've done this correctly, a dialogue box will appear where you wonder whether the cart ended up anywhere useful. If you end up sinking your cart, you must place another glowing fungus in it.

To reach the fungus, you need to go back up to level 1 by using the ladders 12, 6, and 4 on levels 4, 3, and 2 respectively. Alternatively, using Drakan's medallion to teleport back to Burgh de Rott, then hopping over the fence and entering the mine the way you did initially puts you just east of ladder 2 on level 1.

If the cart is empty, you made a mistake at the track map. You must go back to the cart system, load a new fungus, and repeat the entire process.

It's very important that you do not drop the fungus, as this will turn it into ashes and you will have to repeat the entire process all over again.

Deeper into the mines[edit | edit source]

With the fungus in your inventory, go back up the ladder (10) to level 3. Instead of going east to ladder 7, go past it and another haunted cart (G) to reach ladder (9), which leads down to level 4. Make sure that you are not facing east when you climb down the ladder, or else you will not be able to continue.

To go deeper into the mine, you must now make use of the water-powered lift (13) and energise it by activating the water valve (P). Use the zealot's key on the valve to start the water-flow and quickly run back around the pipe system to go down the lift to level 5. Taking too long will cause a sneaky ghost to close the valve again.

After you've gone down the lift, you will find yourself in a vast water-filled chamber that extinguishes all light sources except the glowing fungus. Walk down the eastern corridor and use the stairs (14) to descend to the 6th level. Once down these stairs, head west and through the door to reach a room full of cranes and carts. 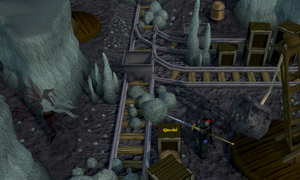 At the centre of the room, try to pick up the Innocent-looking Key (T). Treus Dayth, now turned into a ghost, will ambush you and possess the machinery in there to damage you if you get too close.

He appears at different locations in the room, and each hit to his visible form will cause him to flee to the next location. You can view his movements through a flashing yellow arrow on your screen. During his flight, he'll conjure pickaxes and throw them at you. Protect from Missiles may help reduce the incoming damage from his projectile attacks.

Dying to Treus Dayth will turn the glowing fungus into ashes, requiring you to repeat the whole process.

After defeating Treus Dayth, pick up the innocent-looking key (which turns into a crystal-mine key). You can add it to your steel key ring if you've completed One Small Favour.

Walk up the stairs (14) and head west to the other staircase (15). Use the crystal-mine key key to open the door (U) and go south-east to find the Salve crystal outcrops (Y).

Simply click on any one of them to cut a piece and obtain a Salve shard. 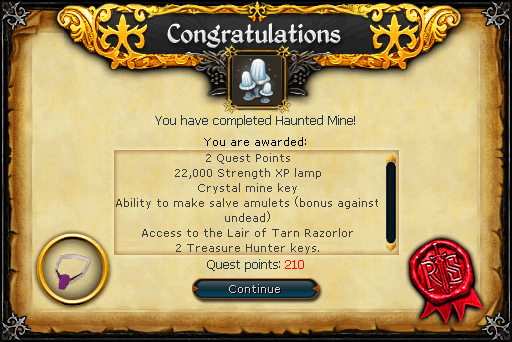 Haunted Mine is directly required for the following quests/miniquests: