From the RuneScape Wiki, the wiki for all things RuneScape
Jump to navigation Jump to search
Not to be confused with Image of Hati.

Hati the Winter Wolf is a legendary canine predator in Fremennik mythology. It is said that when he devours the moon and Sköll, his brother, devours the sun, The End of Things will begin. Hati and his brother Sköll originate somewhere beyond Gielinor,[1], but Hati is said to have been drawn to this world because he mistook the snow for the moon in his wild desire.[2] Now they appear on Gielinor nearly every winter. Sigli or the wolf hunter are Rellekkan hunters, which can be seen attempting to stop Hati, however Hati's invincibility and quick return stop this.

Every January, Hati returns to Gielinor. His first appearance being in 2011, and making a return in every subsequent year, up to and including 2019. In order to get an idea of how to hunt him, Vali can be found inside Rellekka's gate, although this is not required. A quick, free teleport is given by the Wolf hunter, found in Gunnarsgrunn (except in 2014).

On death, he drops the Hati paws, which provide a large amount of experience and bonus experience in any combat skill (excluding Prayer and Summoning), in addition to the cosmetic Hati head and Hati cloak.

Hati doesn't count as a wolf for Slayer assignments. 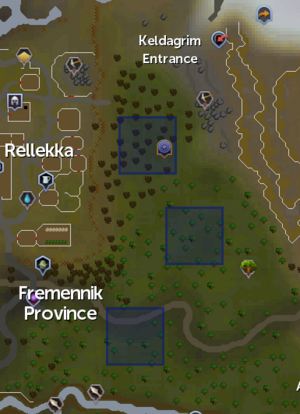 Having a combat level of 84, Hati might not look daunting at first, however taking him down without help can prove time-cosuming. He uses magic and melee attacks, the former of which is an area of effect attack. This can damage multiple players and summoning familiars at once. Walking underneath Hati will give the player the message "You are chilled to the bone from the cold that radiates from Hati", along with being hit for 2,500 typeless damage.

Hati can spawn in one of three locations: just west of the Rellekka lodestone, north-west of the swaying tree, or just off the main path south-east of Rellekka.

Vali states that Hati is as vulnerable to "blade, arrow or spell" as all wolves, however this is not true as regular wolves have a weakness to magic, while Hati has no weakness, meaning all combat styles can be used as effectively as each other. If not within melee distance of Hati, he will only use magic attacks, so Protect from Magic or Deflect Magic are recommended.

Despite Hati's fearsome reputation, as noted above, his attacks are notoriously weak, albeit accurate, and his defence is rather low, with his high life points being his only notable attribute. Due to this, he may take a long time for players to kill him solo, so killing him in a group is advised, if only to speed up the fight.

Hati will follow players for long distances, but if he is taken too far from his original spawn, he will teleport back to it with full health. 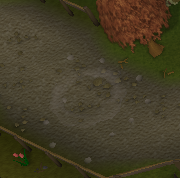 Hati teleporting after being lured too far away from its spawn.

Once Hati dies, anyone who participates in the fight may receive the Hati head, cloak and paws. The Hati cloak is only available as a drop since the 2012 Winter event. Only one Hati head, cloak, and set of paws can be obtained per player. These items may be stored in the toy box of a player-owned house. To be eligible to receive the drop, one must do at least 1 damage to Hati. If the paws have already been obtained from a previous event, picking them up will instead recharge your existing set of paws.

The Jormungand ring can also be obtained from Hati, or any of the other wolves. It can be handed to Eir for either Prayer for Divination experience.

Another variant of Hati's dialogue.