From the RuneScape Wiki, the wiki for all things RuneScape
(Redirected from Haskell)
Jump to: navigation, search
Not to be confused with Askel or Heskel.

Captain Haskell is a member of the Burthorpe Imperial Guard, formerly ranked at the position of quartermaster. As such, he was in charge of the daily challenge system[1], prior to his replacement by Challenge Mistress Fara on 17 February 2014.[2]

Since then, he has held a grudge against Fara, and constantly calls her insults in spite.

He currently plays a small role in Gower Quest. 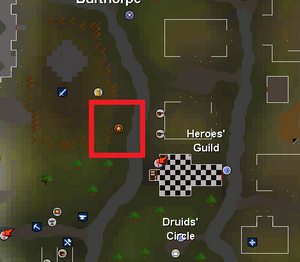 The former location of the Imperial Guard Quartermaster

As Imperial Guard Quartermaster, Haskell was in charge of giving out daily challenges, a way to guide players in what skills to train, in return for a reward.

Additionally, Haskell explained the system and awarded reward bags for completing a daily challenge, which could be done through a right-click option. He also acted as a method for blocking unwanted challenges, on the condition that the player had achieved Skill mastery in that respective skill.

During September 2014, Haskell returned to Burthorpe as a part of the Rival Challenges Treasure Hunter promotion.

Without the permission (or objection) from any higher ups in the Guard,[3] Haskell teamed up with Alice [4] to start giving out Challenge tokens. These functioned similar to the normal daily challenge, with notable differences being they were only obtainable through Treasure Hunter, they could be redeemed anywhere, and they took less time to complete,[5] and that they were only offered for three skills: Hunter, Agility, and Thieving.

10 of these tokens could be saved up in order to redeem them for a Raffle ticket, an item used in Balthazar's Big Raffle, of which this promotion was complimentary to.

Currently, Haskell is ranked Captain in the Imperial Guard, overseeing new recruits, as his leg injury prevents him from active duty.[6]

Haskell plays a small role in Gower Quest, as he can be located in the Behind the Scenes Pub, angrily drinking away his sorrows about being replaced.